Ayaka Asai (Japanese)
Ashley Miller (English)
Akane Okada (岡田 茜, Okada Akane?) is Tomoko's classmate since her first year in high school. She is regularly seen hanging out with Kiyota, Suzuki, and Nemoto. Her last name is revealed in the second year of high school.

In the manga as well as the anime, Okada appears as a member of the consistent group of Tomoko's classmates. In the manga, she is a close friend of Hina Nemoto and becomes upset when she learns that Hina did not confess her dream to become a voice actress to her. She initially finds Tomoko weird but over the course of her second year into her third year, she becomes more comfortable with her. For her part, Tomoko inwardly refers to her as "Forehead/Beetle Brow (凸 • デコ • deko)."

As depicted in both the manga and anime, Okada seems generally pleasant. The manga reveals that she is a close friend to Hina, and she feels hurt when she believes Hina will not confide in her. She can prove outspoken and righteous: she intervenes when she believes Yoshida is bullying Tomoko, becomes upset when she thinks Hina is entering a dangerous industry, and is looked to step in when Kotomi picks a fight with Yoshida. She similarly feels embarrassed and sad when she feels she has hurt someone and will carry this guilt until she has the opportunity to apologize. She apologizes directly to Yuri for misunderstanding the bullying incident and treats Tomoko and Hina to lunch to apologize for her behavior during the class trip to the amusement park.

Okada has long light-brown colored hair in the anime and long blond colored hair in the manga colored panels that reaches her shoulders. She ties a part of her hair high on her head with a pink band that makes her hairstyle resemble a pineapple. Her eyes appear brown in the anime but violet in the color panels released in the manga. She wears the female student's standard uniform. The TomoMote 10th Anniversary reveals that she wore her dyed hair up in the "pineapple" with twin tails in middle school.

Okada and Tomoko initially do not have much of a relationship beyond being classmates. In an early basketball game, she passes the ball to Tomoko who tries to execute the "Ignite Pass Kai" only to sprain her wrist to Okada's irritation. in the next chapter, she stares darkly at Tomoko when she walks with Hina and Hina shouts out a greeting to Tomoko.

Chapter 129 reveals that Okada was jealous of Tomoko when she believed that Hina told Tomoko that she wants to become a voice actress rather than her, her "best friend." For her part, Tomoko inwardly refers to her as "Forehead/Beetle Brow (凸・デコ・deko)." In Chapter 133, she asks to buy Tomoko and Hina lunch as an apology for her behavior during their school trip. During their lunch, she seems genuinely interested in Tomoko. She notices that Tomoko and Kotomi behave similarly and suspects, then insists despite their objections, that they must be friends. In Chapter 139 she visits "Moringa University (森永大学 • Moringa Daigaku)" with Tomoko and Hina.

Okada and Hina Nemoto are close friends and have been in the same class since first year. She has a falling out with Hina which is explained as they reconcile in Chapter 129: Okada felt that Hina did not trust her when she learned that Tomoko knew of Hina's dream to become a voice actress. For her part, Hina felt that Okada started to ignore her when Okada learned of her dream. Hina views Okada as more innocent than she is, partly due to Okada's reaction to learning that as a voice actress Hina could voice eroge. Hina tries to shock Okada again when they visit a university with Tomoko, only to become more shocked herself. In Chapter 148 she begins to suspect that Hina acts strangely around Tomoko.

In Chapter 173 Hina directly asks Akane if she is dating Yoshinori. When Akane denies that they are, Hina presses the subject by asking what she would do if he wanted to touch her breasts or have sex with her. Hina quickly retreats to explain that she was recently confessed to by a boy whom she merely thought of as a friend. Akane responds that she was merely surprised that Hina would suddenly raise such a "lewd" (エロ・ero) subject and suspects it is Tomoko's influence on her.

Okada first really notices Yoshida when she observes her dragging away Tomoko. She confronts Yoshida over her bullying, but Yoshida is too embarrassed to explain why she is upset. She takes away Tomoko only to drag her back to Yoshida when she learns what Tomoko did. She next materially encounters Yoshida at the school trip to the amusement park. Upset over her conflict with Hina, Okada dismisses Yoshida's reason for her fight with her friend Rena.Yoshida grabs her and manages to cause Okada's signature "pineapple" to come apart. However, they do not seems to hold a grudge against one another. During the infamous confrontation between Yoshida and Kotomi Komiyama in the cafeteria when Hina asks her if she will separate them, Akane responds that if worse comes to worse, she will speak to Yoshida. This suggests both that she trusts Yoshida to not to lose her control and to listen to her and that they have developed some basis of trust if not respect.

When she and Tomoko ponder how to awaken the snoozing Hina and Yoshida, Akane reminds Tomoko that her persistent boasts about seeing Yoshida's panties are the reason why Yoshida smacks her. Despite their previous physical fight, Akane remains respectful of Yoshida's feelings. She further volunteers to wake up Yoshida which supports the suggestion that she trusts Yoshida to trust her. Later in that chapter, Yoshida and Akane walk together. Thus, an acquaintance that started with a bullying intervention and continued through a physical altercation is now a comfortable casual relationship.

Kiyota is a classmate, close friend, and has been depicted with her and Hina frequently. When she makes up with Hina, she texts him to apologize to him as well.

Regarding speculation as to his relationship with Akane, in Chapter 173 Hina directly asks her if she is dating Yoshinori. Akane denies that they are. When Hina presses the subject by asking what she would do if he wanted to touch her breasts or have sex with her, Akane assures her that "Yoshi won't look at me like that."

Okada and Nemoto making preparations for the festival.

Tomoko having a daydream about her classmates.

Okada chatting with Nemoto and Kiyota.

After a fight with Yoshida, Okada loses her "pineapple" hairstyle. 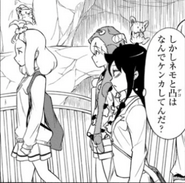 Tomoko explains to her what eroge is. For science.

Okada in black and white. 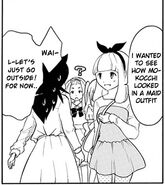 Wearing a maid outfit together with Nemoto in the background 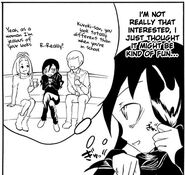 Okada wearing her hair down.

Color Okada on the Volume 14 cover.