Akari is a close friend of Sayaka who has had a crush on Tomoki Kuroki since she was in middle school. She briefly comes to mistake Kotomi Komiyama as his sister.

Akari can be petty at times, at least when it comes to romance. When seeing her crush with another girl she may get jealous and try to out-do her potential "love rival." However, Akari is not cold-hearted and will not sabotage her rival just to get her way.

Akari has a short pixie haircut depicted as black in the manga and as a dark brown in Episode 3 of the anime. As a high school student, she wears a headband. According to Chapter 88, she is either an A or a B cup. The Volume 18 Special Edition statistics reveal her height to be 148 cm or 4'10¼".

Akari has a crush on Tomoki who is largely unaware of her despite being in the same class. However, in the preparation for their class' play production for the Cultural Festival, Sayaka arranges for her to be cast as the heroine and Tomoki as the lead in the class play. This mortifies Akari, and Tomoki reacts with a chilling smile.

Akari and Tomoko have a one-sided rivalry due to a misunderstanding. Akari mistakenly thought Tomoko was Tomoki's girlfriend. After a comic misunderstanding in Chapter 91 which results in Akari confessing to Tomoki in front of Kotomi and Tomoko that she, too, wants "to see his dick," Tomoko refers to her and Kotomi as the "Dick Sisters (ちんちん妹・chinchin imōto/shisotā)." She specifically addresses her as "Little Dick Child (ちん子ちゃん・chinko-chan)."

Akari and Sayaka are close friends. They have known each other since middle school and currently attend the same high school. Aside from hanging out at school, they also spend time outside of class as seen during a Christmas get together. Sayaka is an eager supporter of Akari's crush, but her enthusiasm which includes her loudly discussing it tends to irritate Akari. Sakaya is the one in Chapter 95 who infamously confronts Tomoko's denigration of Akari for wanting to see her brother's unmentionables. In Chapter 145 she loudly reminds Akari of this event in class when she tries to reassure her that she should not be embarrassed by it nor feel she has no chance with Tomoki.

When she discovers that Sayaka appears to be developing a relationship with the previously unnamed friend of Tomoki, Nakamura, she decides not to be jealous but to support her as she supports her over Tomoki. When Sayaka "doth protest too much" denying any interest in Nakamura, Akari tries to tease her by suggesting that, then, she can pursue him. Sayaka explodes over Akari's eventual confession that she was joking by suggesting that Nakamura's Unmentionables will prove too small for her! Watamote Wiki can neither confirm nor deny that Sayaka has viewed Nakamura's di[CENSORED - Ed.]k.

Sayaka will try to engineer situations in which Akari and Tomoki are together to Akari's irritation. In the recent Cultural Festival Arc, she volunteers both Akari and Tomoki to play the leads in their class' play.

Akari mistook Kotomi for Tomoki's older sister. Despite being rivals for Tomoki's affections, Akari and Kotomi have become friends. It appears that Akari is willing to let Kotomi pursue Tomoki, though the Omake reveals she claimed she would not give up her own pursuit. Still, she encourages and helps Kotomi make Valentine's Day chocolates for Tomoki and even rushes to prevent Tomoki receiving the wrong chocolates after a slap-stick mix-up between Tomoko and Kotomi's chocolates.

Sayaka and Akari in middle school

Akari on the left as a middle school student.

Akari does not appreciate Kotomi's humorous reminder that she said "dick." 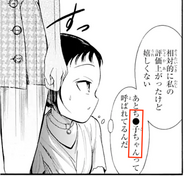 Not Shown: Appreciation from Akari regarding Tomoko's nickname for her.