Green (Volume 16 Cover)
Anna Haruna (春奈杏奈, Haruna Anna?) is one of Yoshida's two consistent friends who first appears unnamed in Chapter 79. While she does not understand Yoshida's love of childish and cute things she generally avoids provoking her and smooths over disagreements between Yoshida and her other friend Reina. She comes to accept and support Tomoko as a friend of Yoshida.

Anna starts as an unnamed friend of Yoshida. Her first name is revealed with the kanji in Chapter 142 when she introduces herself to Tomoko. She can be rather direct: she freely calls Yoshida a "moron (バカ・baka)," and she rhetorically asks if Tomoko and Futaki are "morons" for skipping studying for midterms in Chapter 147. However, she does not persist in insulting them and seems to appreciate their company. She also invited Futaki over to her group when she saw that she was alone. According to Chapter 79, Anna has a boyfriend, named Kento and currently undepicted, whom she describes as someone needy and who will become upset if she does not spend time with him everyday. Tomoko reveals her surname with the kanji when she refers to her to Yoshida in Chapter 147.

Anna does notice the number of friends Tomoko and Masaki have made and considers it "good."

Anna first appears harsh and aloof. She can call Yoshida a "moron" without consequence, and she even denigrates her love of Not for Copyright Reasons Disney World. However, she does go with her on the school trip and tries to smooth over Yoshida's conflict with Reina during the trip. When she later meets Tomoko she playfully calls her a "moron" for skipping studying for midterm exams, but she then accepts her. Despite her initial "delinquent" appearance, she appears supportive of her friends and open to them making new friends.

She has long presumably dyed-blond hair which she wears in a ponytail. The cover to Volume 16 depicts it as a salmon color. Unlike Yoshida, she has not appeared in a flashback or in TomoMote to demonstrate her natural hair color; however, most characters like Yoshida, Uchi, and Miyazaki who appear blond have been revealed to have either black to brown hair. She is notable for having "droopy" eyelids that reach her irises. The Volume 16 cover depicts her eyes as green. She dresses similar to a "Gal" (ギャル・gyaru). While WataMote Wiki will confess some irritation that she will not stand directly next to certain characters to determine her height, she appears to stand at about the same height as Yoshida and Reina. WataMote Wiki has sent a particularly strongly-worded letter to Nico Tanigawa to demand they rectify this. Until then, since Yoshida is slightly taller than Yuri, Anna is at least as tall as Yuri.

Initially Anna does not seem much of a friend. She is the one who frankly tells Yoshida what a Love Hotel is. She crushes Yoshida's desire to go to the for copyright purposes Totally Not Disney World which leaves Yoshida depressed.

However, she does attend the trip with her and smooths over the conflict between Reina and Yoshida. She signals Reina to produce the bunny she bought as a present for Yoshida, then calms them down when Reina makes the mistake of holding it by the ears which again provokes Yoshida. She also offers to leave with Reina rather than pull Yoshida from her small group, and she does not seem offended that Yoshida is with others. While she inwardly blames Yoshida for the previous conflict, she does not inwardly denigrate Tomoko nor Yuri. Indeed, she seems happy that Yoshida has expanded her circle of friends.

Yoshida and Anna usually call her "Rena," but in Chapter 147 and Chapter 155 they both individually pronounce her name as "Reina." Anna tends to act as a leader in their trio. She indulges Yoshida's trip to Not Disney World even though she finds Yoshida's choices childish and boring. When Reina provokes Yoshida's violence by voicing this opinion, Anna eventually helps them reconcile.

Anna has little interaction with Tomoko prior to the trip to Not Disney Land for Trademark Purposes. She does offer to Yoshida that she can stay with Tomoko's group. Anna first really notices Tomoko when she observes her interactions with Yoshida during the infamous dog incident. Somewhat annoyed by Yoshida's behavior, she introduces herself to Tomoko with her first name and offers to hang out with her.

They next meet in an arcade that goes when she decides to skip studying between midterms. While Anna teases her and Futaki for being the type of "morons" who skip studying, she includes them both in their group. The ever-formal Tomoko will refer to Anna to Yoshida as "Haruna-san" which reveals that Tomoko did know who she was by name. For her part, Tomoko persists in inwardly referring to the Yoshida, Reina, and Anna trio as the "delinquents," without any animosity.

After Tomoko and Yoshida's suspension ends, Anna is happy to see that Yoshida has other friends who include Tomoko.

Anna notices Shiki sitting alone at the eating area of the arcade in Chapter 147 and insists on inviting her over. She becomes impressed with her skill playing majong, though she does beat Shiki. She, along with Masaki and Reina, include her in other gaming activities, with Reina particularly impressed and challenged with her skills at majong. They include her in Masaki's "road trip" to celebrate her gaining a driver's license. 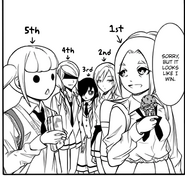 To the Victor Goes the Ice Cream!