Unknown
Hikari Itō (伊藤光, Itō Hikari?), initially a background character, is a good friend of Kotomi Komiyama, and a classmate of her and Tomoko Kuroki in their third year.

Itō appears a nice person and supportive of her friend, Kotomi. Besides this not much is known about Itō but whenever she is shown Itō seems to be mostly normal and level-headed; however, when Kotomi confronts Yoshida she appears to think she has some psychic powers that will calm down Kotomi. Her first name is not revealed until Chapter 143

Itō has black hair with her front bangs gathered with crossing bands. Itō is always seen with short pigtails that fall down to her shoulders. By comparison in Chapter 134, she stands at the level of Tomoki's shoulders while Tomoko's head reaches his face. This would make her shorter than Tomoko.

Itō is almost always seen in some sort of scenario related to Kotomi. In Chapter 117 Itō states that they have been friends for two years as of that point.

In Chapter 134, Itō tries and fails to calm Kotomi down after the girl has become openly envious of Yoshida. Itō's inner monologue implies that this is not the first time Kotomi has done something crazy or creepy and has had to be saved.

Chapter 153 reveals how she and Kotomi first met. Itō takes the initiative to get to know a girl who spends her lunch break reading alone.

In the Volume 19 Omake when Kotomi sees her make-over applied by Asuka Katō, she asks if Hikari has had sex.

Itō and Tomoko seem to interact very little, and it is unknown what they think of each other. Itō remembers Tomoko trying to give her a fist bump back at the entrance exam in Chapter 110. In the later Chapter 195, she recognizes her as Kotomi's friends. She has an inward nickname which, currently, the available scan do not reveal since it is katakana furigana over an "X" in presumed reference to her crossed hair bangs.

The currently enigmatic Futaki sits next to Itō. Itō has not bothered to get to know her and, presumably, Futaki has not either. However, during the field trip to the amusement park Futaki wins a badge hitting all of the targets at the shooting gallery, while Kotomi does poorly and makes excuses worthy of Tomoko. Without a word, Futaki hands the badge to Itō and walks away.

The two do not have much of a relationship, though Asuka does know her. They both attend the Summer Study Camp, and when Asuka later greets her on their first day of school, Itō is very uncomfortable. Asuka notices the eyelid glue Itō has, which she learned to apply at the Camp from Kaho, and when Asuka learns this, she insists on working on her.

Tomoko does not remember when she first met Itō.

The student identified as Itō on the seating chart sits directly behind Tomoko. 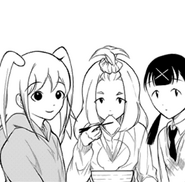 As Transformed by Asuka in Chapter 184-1