Yūko Kurose (Japanese)
Margaret McDonald (English)
Hina Nemoto (根元 陽菜 , Nemoto Hina?) is a classmate of Tomoko since her first year in high school. She is often seen in the background talking with Okada and Kiyota, but her name is revealed only at the start of Tomoko's second year of high school. As of Chapter 139, she is eighteen years old.

Hina first met Tomoko during their entrance exam; however, Tomoko quickly forgot about her. She is Tomoko's high school classmate who wants to become a voice actress. While appearing friendly and vivacious, she often tries to keep herself above others while inwardly accusing them, including Tomoko, over "looking down" on her. The Volume 15 Special Edition reveals how she lost her middle school friends then vowed to put on an act in high school. She confesses to Tomoko that she wants to live a "slice-of-life anime lifestyle." While around Tomoko she tries to appear more knowledgeable about subjects like eroge and sex, she has less experience than Tomoko, and she usually ends up with feeling Tomoko has slighted her. Unlike Tomoko, she receives an average to below-average score on the class exam that includes sexual health, which may explain her questions to Okada in a much later chapter.

Outwardly sociable, friendly and cheerful, she is usually seen talking and laughing with Okada, Kiyota, and Suzuki in class and hanging out with them after school. She inwardly worries how others see her and whether or not they feel they are better than her. She will subtly denigrate others and becomes upset if she feels they have exceeded her. This explains her desire to have Tomoko as a friend on the one hand while periodically digging at her to imagining that Tomoko is in competition with her on the other. She befriends Tomoko at the start of the second year, mainly due to Tomoko's love of anime. Hina seems very friendly to Tomoko, allowing Tomoko to use her chapstick once, though she also seems very competitive. She largely hides her anime interest from Okada and her other friends. When Tomoko discovers that Hina wishes to become a voice actress, Hina rather curtly orders her not to reveal that and not to discuss anime with her when her other friends are around. In Chapter 122 Hina decides to confess her aspirations, and in Chapter 144 she reveals that she took voice lessons during the Golden Week break.

In the anime Hina is shorter than Okada has a slender frame, shoulder-length long brown hair tied into twintails, and blue-green eyes, while in most of the manga she is much taller and her hair has no color. In a flash back to her high school exam in Chapter 110, where Tomoko introduces herself to her, she has black hair which reveals that she dyes her hair. The cover for Volume 11 depicts her hair as a light reddish-brown, while a color depiction in Chapter 132 of a scene from a previous chapter and official artwork produced in anticipation of the release of Volume 15 shows her hair has a lighter almost pink color. She wears the girls' uniform only with a pink sweater vest.

Hina and Tomoko have been in the same class since first year. At the start of the second year, she surprises Tomoko by remembering her from first year. She then tells the other students about Tomoko, building up her initiative to give a good introduction. Ever since then, they have been interacting more, and Tomoko is able to talk to Hina sometimes, which is actually a great deal seeing how she almost talked to nobody at all during her first year.

In Tomoko's reminiscence in Chapter 110, Tomoko introduces herself to her at the end of their entrance exam. Tomoko teaches her a "fist bump" and tells Hina to remember her name, but when Hina starts to tell Tomoko her name, Tomoko has already turned to another student. Hina can only say the two syllables, "Ne-Mo." Tomoko clearly does not remember she met Hina.

In more recent chapters there is some tension between Hina and Tomoko, with Hina trying to prove that she is better, while Tomoko responds by becoming more aggressive herself. In Chapter 130.5, she declares to Yuri that she and Tomoko are friends. Chapter 139 clarifies the issue: Hina believes that Tomoko "messes" with her, and she comes to the conclusion that Tomoko has been doing this ever since the entrance exam. This explains how she must have interpreted Tomoko turning away from her while she was still saying her name. She inwardly vows not to let Tomoko look down on her and, if they attend the same college, she will be the one to "mess" with Tomoko.

Despite her imagined apparent competition with Tomoko, as well as with Yuri as noted below, when she notices that Yuri is upset with Tomoko in Chapter 144, she informs Tomoko and makes her run after Yuri to reconcile. After trying to win another imaginary conflict during the Tanabata, she does thank Tomoko for giving her courage to express her dream to become a voice actress. She reminds Tomoko of her wish to become a writer of light novels and insists that Tomoko write a wish that she will write a novel that Hina will voice in its anime adaption.

In Chapter 173, Hina asks Akane if she is dating Yoshinori. When Akane denies it, Hina raises the hypothetical "what if" Yoshinori asked her to let him touch her breasts or have sex with him. Akane seems stunned, but she recovers quickly to express her surprise that Hina would raise such "lewd" subjects. For her part, Hina feels embarrassed as Akane wonders if Tomoko has influenced her.

The two do not have a very good relationship with both appearing jealous of the other having a relationship with Tomoko. The two spend the most time together during the field trip to the amusement park in Chapters 125-130.5. When the two are alone in Chapter 130.5, Hina frankly asks if Yuri hates her, and Yuri responds that she does not, but she does not exactly like her either. Her dislike of Hina becomes clearer in Chapters 132-133 when she becomes upset that Tomoko agrees to have lunch with Hina then refuses to join them. She ends up sitting behind Hina. When Hina remarks that she did not know Tomoko has a younger brother, Yuri interrupts her to feign surprise. She then continues to interrupt Hina to demonstrate how much more she knows about Tomoko than her.

Despite this apparent rivalry, when she notices that Yuri is upset with Tomoko in Chapter 144 she makes Tomoko run after Yuri to attempt to reconcile. Nevertheless, her belief that a rivalry persists remains. She continues to tease Yuri about her imagined status with regards to Tomoko. This allows Yuri to smugly gain a "win" by informing her that she spent a fun day with Tomoko. After Summer Break, she tries to greet Yuri in class, but finds the conversation like an anime. Even when Yuri insults her, Hina finds the situation potentially interesting, while appearing agitated. For her part, Yuri inwardly admits that while she does not hate Hina, she does not know how to relate to her.

In the fan-voted pairing vignette that occurs in the second part of the 200th Chapter, there is perhaps a bit of rapprochement. Due to Tomoko's lateness, the two end up studying together at a café. When Yuri immediately digs into her books, Hina asks her why she cannot wait for Tomoko. When Yuri explains that she has to study harder, Hina asks her what her dream is. Yuri denies having one, but asks Hina about her dream of becoming a voice actress despite the low pay and other hardships. Yuri seems slightly impressed that Hina explains she will pursue it despite those: she finally looks up from her note book to look at Hina. Yuri then suggests a situation where various WataGirls share an apartment during college. Her imagination does not, however, include Hina, to which an Upset Chibi Hina demands inclusion.

Yuri relents but insists upon conditions which basically match those imposed upon idols and voice actresses: she must commit to five years; romance is forbidden; she should make as few new friends as possible; and even if she does not become a voice actress, Hina will not be allowed to return home to her parents. "Keep aiming for your goal." Hina deems theses rules "harsh!"

Along with Okada, Kiyota is a friend with Hina, and the three are usually seen talking to each other during class. Suzuki often joins them. In earlier chapters, they sing karaoke a lot.

Hina depicted on the cover of Volume 11.

Hina depicted in color in Chapter 132.

Tomoko having a daydream about her classmates.

Nemoto chatting with Okada and Kiyota.

Nemoto and Okada making preparations for the festival

Her pajamas for the school field trip. 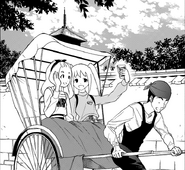 Nemo and Okada in Kyoto 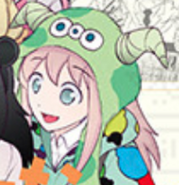 Hina's Eyes as depicted in the possible Volume 13 cover.

Hina discovers what eroge actually is. 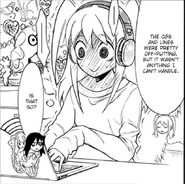 Then she enjoys some eroge . . . for research purposes of course! 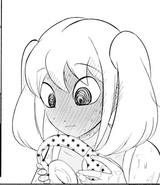 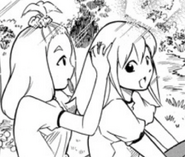 Hina with her hair down

Hina sings during the Christmas party

"Pretty in Pink!"
from the official artwork prepared for the release of Volume 15.