He is the voice actor of the game "Saint Time" who takes part in marketing it by agreeing to meet, shake hands with, and allow the recording of his voice to fans who buy the game.

While a minor character in both the manga and anime, he patiently greets his many fans and happily records whatever they want. The anime episode expands a bit on how fan girls in the long line in front of Tomoko Kuroki start asking for increasingly risqué dialogue. When Tomoko blurts out her long request, he politely agrees to speak it without any judgment.

He is the prototypical male hero: thin, handsome, and with long brown hair. 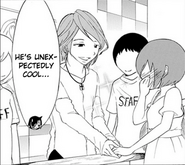 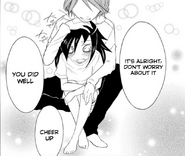 Jun as Tomoko Kuroki imagines him in the manga.

Jun as Tomoko Kuroki imagines him in the anime.