Unknown
Kakinuma (柿沼, Kakinuma?) was Tomoko's second-year classmate in high school. He sat next to her but never had a conversation with her. He is currently a third-year student. It is revealed that he hangs out with other otaku boys who game with Shiki Futaki.

Kakinuma is shown to be somewhat awkward and nerdy, never really standing out much.

Kakinuma has a bowl hairstyle and wears rectangular framed glasses.

Kakinuma is usually shown to be with a couple of other nerds playing video games. None of the others have been named, and not much is known about them or their relationship. It is revealed in Chapter 188 that they accompany Shiki to the arcade. Koharu, observing them, notice that they seem to take a particular interest in Shiki when she dances the dance challenge game.

As noted, he and his friends game with her. Currently nothing more is known about their relationship. 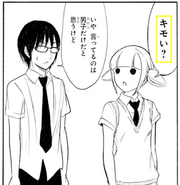