Unknown
Kayo (?, かよ?), unnamed for much of the series and previously referred to as the "Girl with Black Hair" in WataMote Wiki, is a friend of Emiri Uchi. Since the group of friends refer to one another by diminutives of their last names, such as "Ucchī" and "Miya-chan," "Kayo" may not be her full last name. She is notably drawn with blank pupils. After Chapter 152 when both Tomoko and Uchi insult one another, she sternly presses Uchi to apologize to Tomoko.

Miyazaki, Uchi, and the Rest of "The Emoji Gang"

Kayo is part of Uchi's consistent set of friends which includes Miyazaki, Natsu, Nagi, and Kaede.

For much of the series, "The Emoji Gang" members had no names other than nicknames fans and WataMote Wiki used to keep them separate. Currenlty, their last names but none of their first names are known. Uchi spends most of her time with them on the field trip and becomes separated from them during a trip to a famous amusement park. They all notice that Uchi talks a lot about "that girl," Tomoko. Other than Miyazaki, they are: 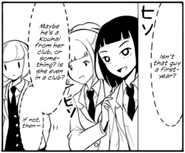 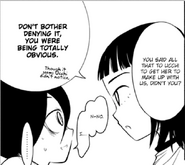