Kiko begins as the 12-13 year-old cousin of Tomoko and Tomoki Kuroki. She first appears in the manga Chapter 14 and in the anime Episode 8 to visit the Kuroki family. Her mother appears "off screen" in the manga. While she is first amazed with Tomoko's stories about having a boyfriend, when she finds out Tomoko has been lying to her all this time, she starts to act superior to her. Eventually, Tomoko suspects that Kii treats her like a pet dog.

It is implied that she is cheerful, since she is usually smiling. However, she is not as gullible as she once was before going into middle school, and Tomoko soon catches wind of this.

Mrs. Satozaki is only heard "off screen," such as in Chapter 62. No indication is given as to whether or not she is Mrs. Kuroki or Mr. Kuroki's sister. Since Mrs. Kuroki, Tomoko, and Tomoki only mention Kii, one can assume she is an only child. Mrs. Satozaki seems to like Tomoko, and when Mrs. Kuroki apologizes to her for her "idiot daughter," Kii's mother politely dismisses this and insists she admires how lively Tomoko is.

Tomoko is her cousin, and Kii addresses Tomoko and refers to her to others as "big sister (お姉ちゃん ・onē-chan)," because Kii adores her a lot. This eventually changes as she matures and realizes that much of what Tomoko claims are exaggerations or lies. She becomes increasingly disappointed with Tomoko until she eventually just pities her and recognizes that Tomoko is just inept and desperate, and she takes it upon herself to "help" Tomoko. During Tomoko's stay at Kii's home during the summer she tries to help improve her appearance and hopes for her to find a boyfriend at an outlet mall, without success and without Tomoko's knowledge as to why. Inwardly, Kii concludes that she has to teach Tomoko further.

In Chapter 104 when she visits Tomoko during New Years, she indicates she has a friend who is a boy, but he is not an actual boyfriend. When Tomoko asks if she ever had a crush on someone or who is her type, Kii happily responses "Onē-chan" meaning Tomoko. Kii explains that Tomoko, unlike her brother, makes her heart skip a beat. Concerned that Kii has a crush on her, Tomoko tries to divert her affections by having her play an otome game. Kii plays it straight, says she enjoys it, but she does not really develop any relationships in the game. In yet another comic misunderstanding, Tomoko gets Kii to admit she likes animals as well, which drives Tomoko to search and find furries. Unknown to her, Kii sees her search leading both of them to believe that the other is into the fetish.

When Kii returns to the series in Chapter 141 with a surprise visit during Tomoko's break, she notices a change in Tomoko. For her part, Tomoko really does not want to be around Kii. She knows Kii knows she has lied to her. However, Kii is surprised that Tomoko seems to have matured. She does not make up stories to try to impress her. She has plans, and she even seems to have friends. After touring the school and meeting people Tomoko knows such as Kotomi, Shizuku, and Yoshida Kii declares that they seem to have fun around Tomoko. To Tomoko's shock and alarm, she claims that she will attend the same college Tomoko will attend.

While Tomoki and Kii are cousins, they are not very close, as they are never seen interacting when she visits during the summer. In Chaper 104 she visits Tomoko for New Years and enters Tomoki's room to greet him. Tomoki seems to find the encounter strange, but Kii does not seem to make anything more of it.

Kii is not seen interacting much with her aunt and uncle, but it is implied that they have a positive relationship.

Kii when she realized Tomoko was doing those things for her.

Kii appreciating Tomoko for her efforts. 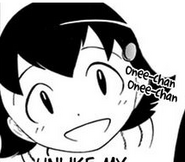 Kii-chan as rendered in the original Japanese 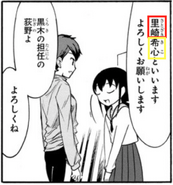