Kosaka appears to be a rather gentlemanly and kind person. He also appears to be smart, as he was seen tutoring an unnamed girl who was assumed to be his girlfriend.

In Episode 3 Tomoko encounters him and a friend as she waits out a rain storm at a bus stop after her umbrella broke. She tries to impress them, fails as only Tomoko can, then leaves briefly to compose herself. When she returns, she finds them gone, When she falls asleep, Kosaka returns having bought Tomoko an umbrella. In Episode 8, Tomoko meets him again. Her cousin, Kiko Satozaki, believes him to be Tomoko's boyfriend after Tomoko's lengthy lie. When Kii finds him with a girl she demands an apology for hurting Tomoko. Discovering this, Tomoko requests that she be left alone with him and very formally apologizes. Kii sees this from a distance, realizes that Kosaka is not Tomoko's boyfriend, and begins treating Tomoko differently.

Nearly two years and one hundred and twenty chapters later, Kosaka reappears in the manga. In Chapter 163 after expressing her wish to Yuri and Mako that she get a boyfriend as they walk home, she walks into Kosaka who is returning home from college. He remembers Tomoko and greets her and asks about her "sister."

Kosaka has reached out to Tomoko to show her some kindness. After Tomoko formally apologizes for claiming to Kii that he was her boyfriend, he did not appear again in the manga until Chapter 163 where he runs into her on a street and greets her. He ask Tomoko how her "sister" is doing; Tomoko does not correct him that Kii is actually her cousin.

How Tomoko sees Kosaka as she began to appreciate him. 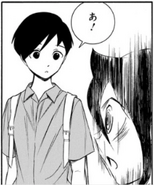 The Return of the Kosaka
Director's Cut [Citation Needed – Ed.]