Mako is Tomoko's classmate and Yuri Tamura's bestfriend. She has a falling out with Yuri when she decides to accept an inviation from Minami to join her group during a field trip. They reconcile; however, Yuri often remains aloof around her. Mako subsequently makes the effort to become friends with Tomoko since she seems to be friends with Yuri. As is her habit, Tomoko stereotypes this friendliness and inwardly calls her "Crazy Lesbian/Lesbo" though she will admit it is only a nasty nickname rather than a belief.

Mako is shown to be quite caring, as she felt bad for leaving Tomoko alone to eat by herself at school one day. She also feels concern for Minami despite the former's tendency to denigrate others. She initially does not seem to be that assertive and never really stands out much. However, she is not clueless. She recognizes Minami's mean behavior. When she sees Yuri behave in a similar fashion to Tomoko in front of Yū Naruse, she takes Yuri aside and politely remonstrates her. Thus far, she has not similarly corrected Minami.

Mako is always shown to have short hair, without color in the manga but depicted as light brown in a color panel. She had that color as a middle schooler. Mako is one of the few characters to have noticeable freckles. Her eye color remains unsettled: they appear blue in the color panel of Chapter 132 and light brown in the cover of WataMote Volume 13.

Yuri and Mako eat lunch very often so it's likely that they are close friends, however that is not to say that they do not have their differences. They were having a fight before the school trip to Kyōto, which ultimately caused Yuri to be in Tomoko's group. They have since made up and continue their friendship, which has extended to include Tomoko in their daily lunches and even group texts. Yuri, however, retains a degree of mistrust and stand-offishness with Mako. For her part, Mako notices some of the bad behavior on the part of Yuri; she politely and privately confronts Yuri when she tries to embarrass Tomoko in front of Yū. Yuri reveals that in her first year of high school Mako briefly had a boyfriend.

Mako initially only interacts with Tomoko through Yuri. In Chapter 99, when Yuri falls sick, Mako becomes overwhelmed with guilt for not having lunch with Tomoko after she mistakenly thought she saw Tomoko become dejected and start sobbing for being excluded. Viewing this as a repeat of what she did to Yuri during the school trip, she begs for forgiveness from Tomoko. In reality, Tomoko did not care, which she tries to explain to Mako. Thinking Tomoko was lying to spare her feelings, Mako becomes convinced that Tomoko is a good person and befriends Tomoko. For her part, Tomoko starts to inwardly refer her as ガチレズ (gachirezu) which most English translations render as "Crazy Lesbian." レズ does mean "lesbian." ガチ , as the link explains, can mean "serious," and "in earnest." When she next talks to Mako in Chapter 112, Tomoko inwardly adds the honorific san to her personal nickname for Mako, and uses it again in Chapter 129.

Minami and Mako are casual friends. Minami invited Mako to her group for the school field trip to Kyōto and additionally invited Mako to eat lunch together when Yuri was absent from school due to sickness. In Chapter 129 when she sees Minami alone and crying at the amusement park, she decides to accompany her. When Minami receives texts from Asuka Katō indicating that Akane Okada is sorry for their argument, she tries to encourage Minami to return. She later stays with her when Minami refuses. She does not directly challenge Minami over her mean-spirited gossip as she did with Yuri.

They have very little depicted interaction; however, in Chapter 152, Uchi specifically refers to her by her nickname to Tomoko when she laments that her current class does not have friends she has been in class with for two years. The most significant interaction between them occurs in Chapter 99 where Uchi feels comfortable approaching Mako to discuss Tomoko with her to the point that Uchi insists that she is Tomoko's "fetish fuel."

While they appear only as classmate with little direct interactions, Chapter 159 reveals that they not only text one another, Mako has reviewed possible career choices for Yoshida. She hears rumors of Masaki having been seen naked by a boy and castigates her for wasting the time she should spend preparing with her future by playing with boys. This understandably upsets Masaki; however, when Masaki overhears Reina and Anna discussing the difference between "raw" and "rubber," she turns to Mako to explain the "birds and the bees," . . . er . . . "bears and the bunnies."

Mako, Yuri, and Tomoko eating lunch together in Chapter 82.

Most of Tomoko's main social circle watching the cheerleading team perform in Chapter 87.

Mako depicted in color in Chapter 132. 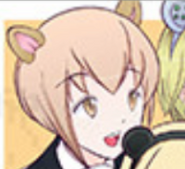 Drawn inside Volume 15 by the Artist for its release.