Makuhari Shūei High School (幕張秀英高校) is the fictional school based on the private Makuhari Junior and Senior High School  that Tomoko Kuroki and most of the student characters attend and the main setting of WataMote. It is located in Chiba City, Tōkyō region. As a private school, it requires an entrance exam. Tomoko first met, but did not remember, Hina Nemoto, during their examination. Her friend Yū Naruse spectacularly fails the exam. When required to serve on the entrance exam committee, Tomoko first meets the very nervous Shizuku Hirasawa.

Tomoko begins both the manga and its anime adaptation anticipating how her life will change for the better when she becomes a high school student. She is currently in her final third year.

Mukahari Shuuei does not appear to regulate the hair of students. Characters have varying lengths of hair, and many female characters and a few male characters color their hair. The regulations do not appear particularly strict given the variety of ways characters wear their uniform or even wear a hoodie over it; however, when Tomoko takes her cousin Kiko Satozaki to visit during her Golden Week break, she still dons her uniform.

Tomoko nearly always wears the basic uniform which consists of a white shirt, a brown or green tie depending on the adaptation and color panel, a beige above-the-knee skirt that has a stripe, and knee-high socks. Over her shirt, Tomoko wears the full beige blazer. The shirt and skirt appears to be the "bare minumum" since Masaki Yoshida usually only wears the shirt and skirt without a tie. Her friend Rena wears her tie loose, while Anna wears a girl's "butterfly" neck tie.

Some girls wear sweaters rather than a blazer. In the anime, both Hina and Okada will wear a pull-over light beige sweater which is given a pink color in the anime. Others, such as Asuka Katō and Kotomi Komiyama wear a buttoned sweater which appears colorless in the manga black and white panels, but can appear a dark brown in some color panels such as the cover for Volume 10. Tomoko wears this sweater with a thin bowtie while souvenier shopping during her school trip to Kyōto.

The boys wear a male variation of the uniform with the white shirt, colored tie, and the blazer, with dark brown slacks. Like his sister, Tomoki wears this full uniform. They can also wear a sweater in lieu of the blazer.

Tomoko doesn't often eat here, so the cafeteria is seldom shown. The number of times the cafeteria has been shown can be counted on one hand.

Kotomi works as a librarian here. Tomoko made a feeble attempt to get Kotomi fired in Chapter 89. 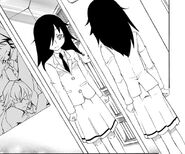 Tomoko dons her uniform for the first time.

Anime depiction of Tomoko staring at her new uniform.

Kitta Izumi live-action recreation of the ending of the episode with music.

Variations on the school uniform.

Tomoko wearing the sweater.
Add a photo to this gallery
Retrieved from "https://watamote.fandom.com/wiki/Makuhari_Sh%C5%ABei_High_School?oldid=21589"
Community content is available under CC-BY-SA unless otherwise noted.