As Student Council President, Megumi cheerfully takes her duties very seriously and knows about her fellow students, such as Tomoko. In the manga she helps Tomoko after she injures her hand in Chapter 20 and then appears periodically to help Tomoko. She quietly reveals to Tomoko that Yoshida is a friend. After her graduation, Tomoko regrets her failure to get to know her when she had the chance. Tomoko will later see but apparently not fully recognize her during her visit to Aoyama Gakuin University, then recall her kindness when she comforts a depressed Shizuku Hirasawa.

After her absence from the series after graduation save for the Volume 14 Omake appearance, Megumi returns due to the behavior of her dog Maro. Her ownership of her less-than-sophisticated pet is revealed in the Volume 14 Omake. Maro returned frequently to Megumi's high school campus to defecate and take a particularly dedicated interest in Yoshida's Road to a Christening. Megumi overhears a number of students happily gossiping about such behavior to her profound embarrassment. When Yoshida organizes a mini-road trip to celebrate obtaining a driver's license, Anna and Reina happen to see Maro in Megumi's car. Since they and other students have assumed his owner must be a pervert, they eagerly order Yoshida to follow Megumi's car until she corners herself in a parking lot. Since the chapter ends with Yoshida's group, which also includes Tomoko and Shiki Futaki, approaching her car to realize the owner of Maro is a girl, and Megumi covering her face in fear, WataMote Wiki again can only advise: "Stay tuned!"

Megumi Imae is very warm and kind to everyone including Tomoko. She is one of the few who takes notice of Tomoko and even cheers her on from a distance. During the culture festival, Megumi borrows a mascot costume for the sole purpose of hugging Tomoko in an effort to cheer her up. She is quite popular; when she graduates high school many students wish her goodbye.

Based on her appearance in the anime and in color covers of volumes, Megumi has black hair worn long but gathered in the back with dark gray-green eyes. She stands a few inches taller than Tomoko.

Megumi Imae takes pity on Tomoko and often helps her out, which Tomoko doesn't ever realize until it's too late. In her first appearance, she walks over to Tomoko in the auditorium to thank her for helping with the set up for the cultural festival. After that, Megumi has does a number of kind acts for Tomoko, including making sure Tomoko is not being bullied by Yoshida in Chapter 98. In that incident, Yoshida is inwardly offended that Tomoko avoids asking her for help. Tomoko fears Yoshida while perversely prodding her. When Megumi realizes that Yoshida is not bullying Tomoko, she goes out of her way to walk with them and let them air out their differences. When Yoshida angrily corrects Tomoko's claim that she only "tickled" her and slaps her, Megumi calmly scolds Tomoko.

Perhaps her most significant action, included in the anime, occurs at the end of the cultural festival. Unknown to Tomoko, she approaches her in a mascot costume, gives her a balloon, and hugs her. In the end sequence of Episode 12, Tomoko carries the balloon home.

On her day of graduation, Megume introduces herself to Tomoko and asks to hug her again one more time, which reveals that she was the costumed mascot who gave Tomoko the balloon and hugged her at the cultural festival. In a moment of maturity, Tomoko deeply regrets wasting the chance to get to really know her before she graduated. Later when Tomoko visits Aoyama Gakuin University with Asuka Katō, the Volume 14 Omake reveals that she and Tomoko saw one another on campus. Megumi thinks to herself, "I will wait, of course, Tomoko-chan."

In her final year, Tomoko recalls Megumi's kindness though she does not quite understand the reason for it. When she sees the first-year student Shizuku Hirasawa depressed after being humiliated in the school sports meet, Tomoko decides to at least act like Megumi and give Shizuku a hug. 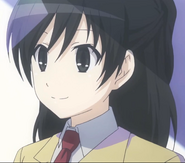 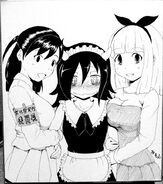 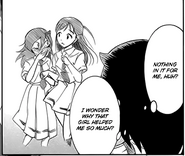 Megume reveals that she was the one who hugged Tomoko in the mascot costume.

Shown: Megumi tries to avoid publicity for her pet . . . probably 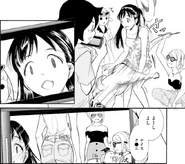