Unknown
Miho Narita (成田 美保, Narita Miho?) is a friend and classmate of Fūka Sasaki who comes to know Tomoko through a study session.

Miho first appears as an unnamed girl taking part in cheering her class with Fūka. She first speaks many chapters later congratulating her friend for her walk-off win in softball in the school's intramurals, though she may be the "Miho" mention as having a boyfriend back in Chapter 6 and adapted in Episode 6. When Fūka refuses to be the one to accept the award for their class, she happily runs up. In Chapter 155 with Fūka, she joins Asuka Katō, Tomoko, and Kaho's study group. When Tomoko blurts out that she wants to touch breasts, and Katō offers hers, she appears intrigued. However, after Katō and Tomoko return from a break, she, along with Fūka and Kaho, appears shocked and inwardly wonders if Tomoko actually did foundle Katō.

She shares a room with Tomoko and Fūka during the study camp. Unlike her friend, Miho seems open to Tomoko. She nearly calls her "Boob-Lover (おっぱい好きの・oppai suki no)" but then pleasantly teases her about trying to peek at her panties.

Chapter 192-2 reveals that she can play the piano.

Miho appears a very happy and bubbly character who enjoys playfully teasing others. Indeed, WataMote Wiki confesses difficulty avoiding the adverb "happily" in describing every action she performs. She is not shocked by Tomoko's inadvertent blurting out that she wants to fondle boobs during the study session. She will tease Tomoko about sneaking peaks at panties as well as teasing Fūka about her behavior. She appears to enjoy attention. She happily cheers and shows her armpits when boys in the baseball stadium shout at her. During the Summer Study Camp, she happily readily includes Tomoko's friend Yū Naruse in discussions.

She appears to have short dyed-blond hair, the official artwork for Volume 16 suggests that she dyes her hair a light brown, but the cover for Volume 17 depicts her with dyed-blond. Current color depictions do not reveal her eye color. A view of her standing with other WataGirls in Chapter 175-2 depicts her as standing slightly less tall as her friend Fūka and as tall as Yū. WataMote Wiki adds for purely the sake of completeness that she happily tells Tomoko she removes her hair "down there."

Miho appears to like Tomoko. She joins Fūka in a study session with Asuka and Tomoko in Chapter 155 where the tired Tomoko blurts out that she wants to fondle breasts. She is happy that Tomoko rooms with her and Fūka during the Study Camp and playfully teases her about her habit of peaking at panties. She will later tease Fūka about peaking at Tomoko while Tomoko was in the bathroom. However, she does not denigrate nor demean Tomoko. For her part, Tomoko does not have a derogatory nickname for her, nor does she appear irritated by her as she does with Fūka. When she discovers Tomoko dyed her "hair down there" despite Tomoko's best efforts to hide it, she happily asks her about it, and when Tomoko becomes embarrassed, asks her to whisper to her the reason for doing it. When Tomoko complies, she [happily – Ed.] suggests she simply have hers removed. When Tomoko demurs, Miho happily affirms that she has her removed. When she notices a blushing Tomoko looking down at her with that revelation, she, well, "happily," squirts Tomoko in the face with water for looking.

Tomoko appears to tolerate if not like Miho in that she imagines her chibi as happily pleasantly smiling, and in Chapter 180, she fantasizes enjoying a drink with her, Asuka, and Yū. She does suspect that Miho is experienced with boys based on nothing but her prejudices. Nevertheless, when Miho insists that "Kuro-chan" address her by her first name, Tomoko stammers "Miho-san."

She appears to be a friend through Fūka. Thus far, they have not had an individual interaction. She is very supportive of Asuka becoming closer to Tomoko when Asuka asks her, Fūka, and Yū why they seem closer to Tomoko.

They appear together frequently. Miho will tease Fūka about her behavior.

Currently unnamed and affectionately deemed the "Experienced Friend" by WataMote Wiki, little is known about her, but Miho appears to have a very close and playful relationship with her, and they frequently appear together. 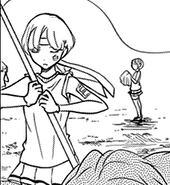 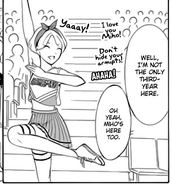 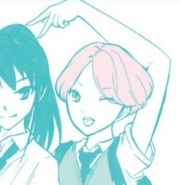 Miho in Color
from the Volume 16 Official Art

Miho in Color!
from the Volume 17 cover

Shown: Miho – Happily – handing out numbered lots to determine the "winners" of the Christmas Party.