He is rarely seen; his wife handles much of the adult interaction with the two children in the manga and anime. The anime merely recreates the classic comic but touching scene of him putting the sleeping Tomoko to bed, while turning off her "personal massager" and "Boy Love" game. He does not appear again in the anime, and he next appears in the manga in Chapter 121 when Tomoko tags along on one of his fishing trips.

In keeping with the general practice of WataMote, character details are more implied rather than revealed. Thus far, his face is never shown in either media. Only in Chapter 121 are his eyes seen in the rearview mirror of his car. One can assume he is a "salary man," given that in both the manga and anime depiction of him "walking in" on Tomoko, he returns from work with a cake given to him by a client. He does not appear during the day save during his fishing trip. While he probably works hard to keep his family secure in their lifestyle, his wife also works a part-time position. Neither media explain if this is due to financial reasons or because Tomoko's mom wishes to have a part-time job.

He enjoys fishing, and often would bring Tomoko along with him when she was a child. Tomoki would tag along with Tomoko until around sixth grade.

As noted, WataMote tends to imply character details and not present them all at once.

Mr. Kuroki seems to care about his daughter as any normal father would, and their relationship seems normal for the most part. In the famous scene in both the manga and anime where he discovers her asleep on the floor of her room with her "personal massager" running while a BL video is paused, he does not embarrass her. In Chapter 121, he talks to her directly about her life as they fish.

Thus far in the manga, the two are not depicted together. There seems to be no problems mentioned between them, so they are probably on good terms.

Since no known problems are shown or implied in their marriage, the two seem to be on good terms. Chapter 121 implies that the two discuss their children since he takes the time to talk with his daughter about things her mother mentioned.

Not much is known about their relationship but it can be assumed that they are at least cordial with each other. 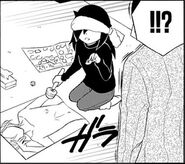 Tomoko's father "walks in" on Tomoko in the anime.