Unknown
Nagi Ōtonari (大隣凪, Ōtonari Nagi?)[1] is a friend of Emiri Uchi who, for much of the series, was only known affectionately as the Girl with Glasses by WataMote Wiki, and "Glasses-chan" by other fans. She seems a friendly background character and appears to organize the class dinner in Chapter 120. She finally receives a name in Chapter 171, when she receives her first name. She is, however, the first of the "Emoji Gang" to receive a full name when her surname is revealed in the WataMote Volume 20 Special Edition Booklet.

Like many characters in WataMote, Nagi starts as an unnamed background character. She is part of the consistent group friends of Uchi. She is perhaps the first to understand Uchi has a crush on Tomoko, and while she deems it "interesting," she urges Tomoko to be friends with Uchi while gently prodding Uchi to apologize to Tomoko for calling her "disgusting/gross" (キモい).

Nagi appears a pleasant girl. When she discovers the crush Uchi has on Tomoko, she separately urges both to become friends. When rooming with the quiet and taciturn Yuri, she invites her to go the hot spring rather than use the bath in their room.

While her glasses are her most readily recognizable attribute and lead to her nicknames, she also has long hair gathered into a ponytail. Since she has thus far not been depicted in color, her dark gray-colored hair in the manga could be natural brown or dyed. She stands slightly taller than Tomoko.

Nagi considers a pairing of Tomoko and Uchi to be "interesting." As part of her and the rest of the "Emoji Gang" attempt to reconcile Tomoko and Uchi, she encourages Tomoko to call Uchi by her nickname. For her part, Tomoko inwardly refers to her in that chapter as "Glasses" and in other chapters with the more formal "Glasses-san." Nagi will later gently prod Uchi to apologize to Tomoko.

In the Kibako Group alternate universe released with the Special Edition Booklet of Volume 20 Nagi invites Tomoko to eat lunch with her and her friends. Tomoko subsequently joins her group.

In Chapter 152 during the discussion about Uchi's behavior she notes that Uchi seems to want to spend time with "the one she likes": Tomoko. She implies that Uchi has a crush on Tomoko and finds the pairing "interesting." She suggests that Tomoko address Uchi by their nickname for her. While their individual relationship is not yet revealed, Nagi seems supportive of Uchi having a crush on a girl.

Nagi's first meaningful interaction with Yuri occurs in Chapter 171 when, while attending a class together in the Summer Study Camp, she invites Yuri to bath in the hotel hot spring rather than a room bath. Yuri does attend and, to her surprise, finds it easy to talk to Nagi and other members of the "Emoji Gang." She will later smile when Yuri blushes and mutters a cheer towards the sea with other of the "WataGirls" attending the camp. She will repeat Yuri's cheer. 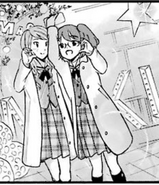