Tomoko's homeroom teacher who strives to make her more sociable even though her tactics sometimes only serve to worsen Tomoko's social anxieties.

A very kind and hardworking teacher who tries to help Tomoko befriend other people. Though strict, she tries to support her students. She gives a good plan for Hina Nemoto to pursue her dream of becoming a voice actress. However, her eagerness often backfires. Her excitement to announce that a student wishes to become a voice actress embarrasses Hina. Her efforts to make Tomoko more sociable often humiliate Tomoko further.

Nevertheless, she is not a "fool" character who constantly screws up and ruins things. When she meets with Tomoko and Mrs. Kuroki, she supports Tomoko. Some of her plans, such as making Tomoko act as the group leader for a field trip, in the long run help Tomoko form friendships with a number of classmates. As with most characters in the series, she has her flaws, but she is not only those flaws. Ultimately, she sincerely cares about her students as individuals.

Ogino has short brown hair. She is often seen wearing the outfit for gym teachers, consisting of a high collar jacket and pants. Sometimes she is seen wearing gym shirt and pants, and a whistle for use during gym classes.

Tomoko is one of the students Ogino teaches in her class. After observing Tomoko in the class for a week, she realizes that Tomoko does not have many, if not any friends at all, in the class. From then on, Ogino has been trying to help and support Tomoko at any time she can, from fixing her nervous and stuttering speaking while talking to people, encouraging her to make friends, to giving her supplementary PE classes. Ogino wants Tomoko to be more straightforward, as well as coming to other people to make friends instead of waiting for someone to find her. Despite not liking to be in contact with her teacher, and often feeling embarrassed when Ogino tries to help her, in Chapter 50 Tomoko is shown to actually somewhat appreciate her teacher's help and support. 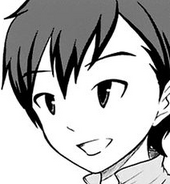 Ogino in the manga.

At a parent-teacher conference with Asuka Katō's mother.

Ogino wishes to discuss your search history. . . .
Add a photo to this gallery

Retrieved from "https://watamote.fandom.com/wiki/Ogino?oldid=23322"
Community content is available under CC-BY-SA unless otherwise noted.