Kanami Satō
Sayaka (紗弥加, Sayaka?) is currently a minor character who is a friend of Akari Iguchi.

Sayaka appears first in Chapter 25 alongside Akari when they visit the Kuroki Residence to give the sick Tomoko Kuroki printouts from school. She is aware of her friend's crush on Tomoki. When Tomoko Kuroki insults Akari as being interested in seeing her brother's "dick," Sayaka infamously stands up for her friend while demanding to know why Tomoko thinks girlfriends and boyfriends being curious is "strange."

Sayaka seems very bold and uninhibited; however, she may rather be more mature about matters that teenagers tend to obsess over. Thus in Chapter 95 when Tomoko torments her friend Akari over her belief that Akari asked to see Tomoki's genitals, Sayaka frankly responds, "Even girls are interested in those kinds of things, it's not weird at all!" However, Chapter 169 reveals that she lacks practical experience when she tries to measure Tomoki's interest in girls based on whether or not his pants reveals evidence of an erection.

Sayaka initially has loose, black shoulder-length hair. By her second year in high school, her hair extends below her shoulders.

Akari and Sayaka have been close friends since middle school. Sayaka is often seen with Akari, usually encouraging Akari to interact with Tomoki. She famously confronts Tomoko over her insults towards Akari regarding her desire to view her brother's Unmentionables. She cheers on Akari's pursuit of Tomoki to the extreme point of loudly announcing in their classroom that Tomoki groped an upperclasswoman.

Chapter 156 reveals that she has formed a relationship with the until-then unnamed friend of Tomoki, Nakamura. Their relationship appears one of needling and arguing. When Akari remarks on her friendship with Nakamura, Akari does the Grand Tradition of Tsundere proud by denying liking him while listing all of the negative aspects of Nakamura. Akari slyly teases her by suggesting that she can then fall in love with Nakamura; Akari reacts by exploding that Nakamura is wrong for Akari, and over Akari's attempt to confess she was joking, she continues that Nakamura's Unmentionable is "too small" for Akari, and she would prefer Tomoki's which, she assumes, must be "massive!" Akari takes this in stride, and WataMote Wiki can neither confirm nor deny that Sayaka has such information.

Sayaka first really meets Tomoko in Chapter 95 having only seen her from a distance during the sports festival. Realizing she is Tomoki's older sister, she insists on meeting her despite Akari's objections. Tomoko naturally directly asks Akari, "are you here to ask me about dicks again?" To Akari's horror and Tomoko's surprise, Sayaka asks Tomoko, "What's wrong with wanting to see the genitalia of the person you like?" As a result, Tomoko considers her one of the "Dick Sisters (ちんちん妹・chinchin imōto/shisotā)."

A previously unnamed and background character who teased Akari about her cookies in Chapter 41. Chapter 156 reveals that the two have taken an interest in one another where both bicker and tease one another in all of the greatest traditions of tsundere. However, Chapter 168 reveals that she has a crush on him when she starts to cry when he cancels a study date with her, Tomoki, and Akari due to rain. 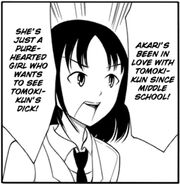 Sayaka engages in a rational discussion about teenage health.

Sayaka on the right as a middle school student.

Sayaka depicted, but not named, on the left in Episode 3. 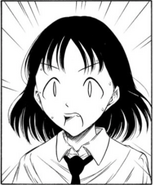 Sayaka reacts calmly to Akari teasing her about falling in love with a boy Sayaka claims she really does not like. 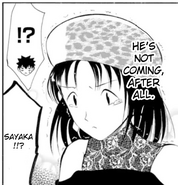 Sayaka starts to cry when she realizes Nakamura will not join a study date.