Unknown
Shizuku Hirasawa (平沢雫, Hirasawa Shizuku?) is a previously anonymous under-classmate of Tomoko whom Tomoko helped when she became sick during her high school entrance examination.

Shizuku is a nervous girl who becomes overcome by the stress of the high school entrance exam. On duty, Tomoko takes care of her. She is so nervous because she promised to attend the same school as her boyfriend. However, when she passes the exam and he fails, she cheerfully declares that no matter how far apart their hearts are, they remain connected. Tomoko deems this the behavior of a "scum." Nevertheless, as of Chapter 142, she continues to date him though she cheerfully observes that, "failing seems to be the only thing he's good at."

The following year she eagerly greets Tomoko as her "senpai," or "upperclasswoman." Tomoko accepts her as her kōhai but for entirely Tomokoesque reasons. She then earns the wrath of Emiri Uchi. When she notices Tomoki, she earns the wrath of Kotomi.

Shizuku appears a nervous girl who falls sick due to stress during Tomoko's high school entrance exam. She promised to attend the same school as her boyfriend. However, when he fails, she cheerfully concludes they can attend different schools. Tomoko deems this behavior that of a "scum." When Tomoko next sees her in school, Shizuku happily calls Tomoko her "senpai," and wishes to be Tomoko's "kōhei." During her conversation and her meeting Tomoko's other friends, she reveals to the reader that once she started talking to boys in middle school, other girls began to hate her. In high school, she can only talk to boys and feels the other girls hate her.

Shizuku has long black hair with a pair of barrettes on each side. She sits and stands about one or two inches taller than Tomoko.

Initially, they do not have much of a relationship. Tomoko performed her duty to help Shizuku during the entrance exam when Shizuku fell sick. Staying with her, Tomoko goes through the motions of trying to comfort her by claiming that "even a delinquent and some perverts manage to pass." At the time, Shizuku confesses that she must pass to attend the same school as her boyfriend; however, when she passes and he fails, she immediately and happily decides she can attend Tomoko's school without him. Tomoko deems this the behavior of a "scum."

Tomoko next encounters Shizuku in Chapter 132. Shizuku calls Tomoko her senpai. She makes it clear that she hangs out with boys because she has no female friends since the other girls hate for the attention boys pay to her. To her delight, Tomoko accepts her as her kōhai but for unspoken alterior motives: she assumes Shizuku is a "super slut" who will be comfortable talking about sexual topics unlike her other friends.

Their relationship potentially changes in Chapter 149. She confesses to Tomoko that she applied make-up to appear appropriately when meeting her for lunch. She then directly asks Tomoko how she made so many girl friends. Tomoko confesses that she did not have friends for much of her first two years, then explains how, "little by little" she and some grew closer after meeting during their school trip. She also confesses that she cannot talk to boys. When Shizuku asks for help practicing for the intramural table tennis competition with the hope that if she does well some of her female classmates will warm up to her, Tomoko agrees. Granted, Tomoko being Tomoko, during practice she concludes that there is nothing about Shizuku which would make girl like her, but she finds her hot as she jumps around with her skirt flipping up and down. When Shizuku fails miserably in the actual match, Tomoko is reminded of the kindness Megumi Imae showed her and embraces her.

While in subsequent chapters they do not appear alone together, there is evidence that the two have developed a senpai-kōhai relationship. Chapter 157 reveals that the two have lunch alone together. During her suspension, Tomoko remembers that she was going to have lunch with Shizuku and calls to let her know that she cannot. Yuri, who finds Shizuku alone at her usual meeting place with Tomoko, informs her that Tomoko has been suspended and Shizuku tells her that her senpai informed her, but she decided to come anyways since she promised. This both bemuses and slightly irritates Yuri as she notes that Tomoko has exchanged contact information with yet another girl. In Chapter 158, Tomoko notices Shizuku walking away through a window in the Student Counseling Room and realizes that she has to call her to tell her she cannot meet her for lunch. This suggests that since Tomoko comforted Shizuku as Megumi comforted her, she has started to take her senpai responsibilities seriously.

Tomoko does not actually bring up sexual matters with her until Chapter 184-2 when, feeling humiliated by Fūka Sasaki's boasting, she asks about her first time. Shizuku confesses that she has not had sex with her boyfriend. When Tomoko expresses surprise that her boyfriend is that "patient" and, if she was him, she would rape Shizuku immediately, Shizuku explains that there are ways of, well, deescalating passions, which she will later in the chapter demonstrate to the innocent Tomoko and Fūka.

Shizuku has a brief introduction to Tomoko's three friends in Chapter 132.  They individually encounter her talking to Tomoko:

When she sees Yoshida she suspects that she is a delinquent. Yoshida senses this, but Tomoko calms her down, and Yosida sits next to her. Shizuku finds her surprisingly nice, and her willingess to sit with her contrasts with the behavior of Yuri and Hina.

Hina similarly reveals her nasty frankness: she openly wonders why Shizuku would talk to someone at an exam and then completely ignores Shizuku. Like Yuri, Hina shows no interest in knowing, let alone including, her. However at the end of Chapter 134, Hina brightly smiles and waves to her when she comes to join Tomoko and Katō for lunch.

In Chapter 132, Shizuku accidentally bumps into Uchi in the hallway. Before Shizuku can finish her apology, Uchi basically dismisses her and calls her a "bitch." This is potentially significant in that the chapter has Tomoko ridicule the shōjo manga trope of the protagonist tormented by a rival for a boy's affection only for both to eventually become friends. Uchi just that morning had her fantasy of Tomoko shattered while Shizuku revels in her imagination of Tomoko as a manga senpai who will help her. If Uchi does not become like the "rival" to Shizuku's "protagonist" for Tomoko's attention, this is still the first time Uchi is seen directly insulting someone. However, Tomoko will recall the two of them both cheering her during her table tennis match, which suggests that Uchi did not carry a grudge against her. Still, Uchi becomes enraged when she sees and overhears Tomoko and Shizuku talk during the school's Tanabata Festival.

In Chapter 142, Kotomi overhears an excited Shizuku ask Tomoko which soccer player is her brother. Kotomi snaps her picture with her phone and announces that she took it because it is unusual to see "pigs (ブタ・buta)" talk. 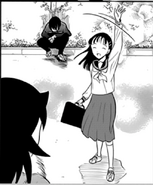 Waving to Tomoko after passing her exam. 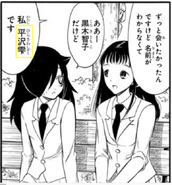 Shizuku reveals her name to Tomoko 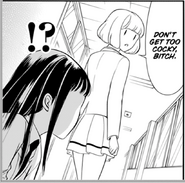 Shizuku triggers the Wrath of Uchi! 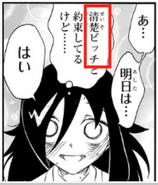 Tomoko uses her nickname for Shizuku 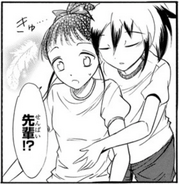 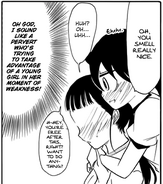 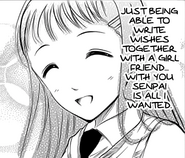 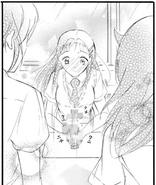 Shown: Shizuku demonstrates to Fūka and Tomoko her skill in pottery . . . probably