He has long brown hair depicted without color in the manga. This anime depiction appears to look more like Wada; however, he is identified as "Suzuki (鈴木)" in the seating chart. 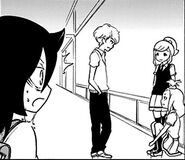 Talking with Okada and another classmate

Having lunch with Tomoko

Having lunch with Tomoko part 2

Being annoyed at Nemoto and Okada's fight