Template:Date based on this English release. May move depending on official release.

This is a new 10th anniversary release of TotoMote[1]. It is divided into four separate pages.

Yū, with Kotomi behind her, walks up to Tomoko who is sitting at her desk reading a manga. When Yū asks her what she is reading, Tomoko responds that it is the new Gangan Joker which happens to be a 10th anniversary issue. Tomoko opines that while a 10th anniversary would be nothing for Shōnen Jump, if they add the "Gangan Wing" period, it is over twenty years which is impressive in their current age where one can read manga on a Smartphone. She notes that Gangan Powered did not make it that long, then muses it may be a bad time to mention it. "Then shut up," Kotomi responds.

The trio walk home with Yū. Tomoko continues to explain that while the magazines can last ten years, it is rare for a manga series. Yū pleasantly agrees while Kotomi sourly looks on. Tomoko explains that the standard "slice-of-life" series involving girls by ten years either have to move the characters to college or introduce a new character. Staring at Kotomi, Tomoko adds that then the "unpopular characters" gain less and less "screen time," then suggests that if their lives were a manga, Kotomi would be diminished. Kotomi orders her to "shut up" again.

Tomoko then directs their attention to a girl walking in front of them and suggests that she could replace Kotomi. Kotomi retorts that the girl is clearly a "background character."

In a bookstore, the trio notice Asuka Katō who is walking next to a mostly obscured taller boy. Tomoko asks Yū if someone like herself could get a one or two boyfriend within ten years. When Yū tries to reply that she does not see why not, Kotomi emphatically denies it. When Tomoko angrily asks why, she reminds her of how nervous she acted around a boy she talked to. Tomoko recalls stammeringly asking a boy what their next class is: "That nosy bitch saw that?" While Katō giggles with the boy next to her, Tomoko opines that getting embarrassed and unable to talk around guys is the way moe characters act. In reality, that does not make one popular. Kotomi suggests that it is normally the "nice girls who are pretty and can hold conversations" who are the ones who are popular.

Hope for the Future

The trio walk past a number of students as they reach the station. The first is Yoshida standing looking tough while some distance away, Akane enjoys an ice cream crepe with an unidentified and anonymously drawn girl. Tomoko notes that it has been a while since they have been to the station and there are a lot of other kids around. Yū suggests that they could be middle school students going to the Education Research Society.

Tomoko confesses that while she cannot picture herself ten years from now, she bets that she could be friends with a lot of these students. Kotomi dismisses her by noting that she can barely manage to make any friends in middle school.

As Yuri, Mako, Minami, possibly Maki, Sachi, and Kiyota mill about, Tomoko politely asks "Kotomi-something" if she has any hopes or dreams for ten years from now. Kotomi admits that she does, but it is "so far fetched" that she cannot admit it outloud. When Tomoko asks Yū, Yū responds that she is a little embarrassed saying it.

Blushing, Yū confesses that she wants all three of them to remain friends in ten years. Kotomi agrees that Yū is correct while thinking that she wants the Lottes to win the league championship.

Since this came out at the time of the release of WataMote Chapter 159 much of the "forwards" refer to details in the future with respect to TomoMote but in the past for WataMote readers: 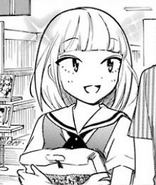