Broken up into single-page vignettes, the first contains the side-panel narration: "Mokocchi is stuck in the 3 person group she never wanted. . ."

After watching some anime one night, Tomoko decides to style her hair after a character. Unfortunately for her, Kotomi has the exact same hair and the two girls learn to their horror that the other is an otaku too.

Kotomi sees this as an opportunity to befriend her, but Tomoko uses it to denigrate Kotomi by claiming that she stopped watching anime in elementary school. While inwardly cursing Tomoko, Kotomi tries to pretend that she no longer watches "that much anime."

However, when Yū says she watched it and found it interesting, Tomoko immediately declares she watched it as Kotomi inwardly seethes. Yū cheerfully asks if they both chose their hairstyle from the anime, but they simultaneously deny it.

In the girls room, two fix their hair. One asks the other if she saw the two girls in their class with "major bed hair." The other corrects her that they are doing a "pair look," and both laugh. Tomoko and Kotomi emerge from the stalls and promptly change their hair. 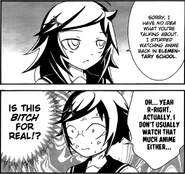 Tomoko slaps back Kotomi's attempt at rapprochement.
Add a photo to this gallery

Retrieved from "https://watamote.fandom.com/wiki/TomoMote_Chapter_003?oldid=12941"
Community content is available under CC-BY-SA unless otherwise noted.