While Yū sleeps at her desk in the classroom, Tomoko playfully unravels her braids and takes off her glasses. Blushing and giggling, she starts poking at Yū's face as Yū starts "mmmm"ing and Kotomi watches sweating.

Kotomi confronts Tomoko who tries to make the excuse that she was "just waking her up," until the sleeping Yū suddenly starts sucking on Tomoko's index finger. Tomoko becomes overwhelmed, and WataMote Wikia has no official opinion on why her left hand is under the desk. Kotomi demands that Tomoko remove her finger; Tomoko cannot and complains that Kotomi has misunderstood the situation, and WataMote Wikia remains ashamed that it has to explain that Tomoko's left hand is nowhere near where you think.

Cut from the Same ClothEdit

Having removed her finger, a sweating and strangely satisfied Tomoko tries to explain to Kotomi that when Yū started sucking on her finger, it felt "really weird." Kotomi tells her to shut-up and then starts poking Yū with her left hand to wake her. Suddenly, the still sleeping Yū takes Kotomi's hand and starts sucking on her index finger. Kotomi becomes overwhelmed like Tomoko, but WataMote Wikia is happy to report that she uses her right hand to slap Tomoko as she pulls her left hand free and asks if all three of them are "perverts."

Yū awakens and asks what the sweating Tomoko and Kotomi are doing. Kotomi claims "nothing!" while Tomoko notes that Yū was sleeping very deeply and asks her what type of dream she was having. Yū blushes and states that she was "licking something. And sucking something." Kotomi and Tomoko blush, sweat, and seem strangely satified for reasons upon which WataMote Wikia could not possibly comment.

The narration notes that all three of them "are perverts."

WataMote Wikia stresses that Tomoko is only interested in waking Yū.

Tomoko is just trying to wake Yū . . .
WataMote Wikia does not see what all the fuss is about.

Awwww . . . this is cute and utterly innocent.

Kotomi simply wishes to wake Yū . . . why would anyone think otherwise? 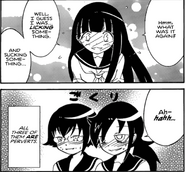 Retrieved from "https://watamote.fandom.com/wiki/TomoMote_Chapter_007?oldid=13080"
Community content is available under CC-BY-SA unless otherwise noted.