After seeing how good Yū is at the ball toss, Tomoko asks her to repeats the phrase, "I love the ball toss." When Yū complies and Tomoko then tries to have her repeat the phrase, "Tossing balls is my. . . ." Kotomi hits Tomoko in her face with a ball.

Speaking of the Athletic Festival

With both Yū and Tomoko bored by the gymnastics event, Kotomi tries to start a conversation on her favorite baseball team, the Chiba Lotte Marines. As both stare at her, she realizes to her horror that neither of them care.

Tomoko and Kotomi have to work together. Kotomi has to support Tomoko standing on her thighs. They fail.

Yū happily cheers that their White Team won! Tomoko and Kotomi do not share in her excitement. Tomoko inwardly looks forward to an all-night game playing session since they have the next day off, while Kotomi inwardly notes that whether or not their team won or lost has no impact on their lives. 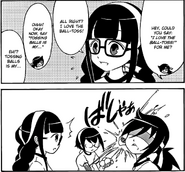 Kotomi objects to Tomoko's innuendos by bouncing balls off her face. 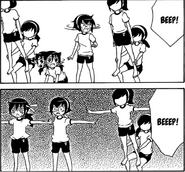