Yū waits for Kotomi and Tomoko at a shrine for the New Years' Shrine Visit. While waiting, Yū inwardly wonders if the traditional clothes her mother made her wear will be too flashy if Tomoko and Kotomi arrive in normal clothes. To her surprise, Kotomi arrives in quite trendy clothing.

Tomoko arrives wearing her normal hat, long coat, and fox-scarf. She greets Yū then stares questioningly at Kotomi. When Kotomi asks her why, Tomoko tells her not to wear stylish clothing just because it is the New Year. Kotomi complains that she did not even bother to say "Happy New Year" to her.

The three ring the bell and pray. Yū asks Tomoko what she prayed for, and Tomoko frankly declares that she does not believe in any gods, then continues to declare that she is more interested in killing gods. Yū asks her if something happened to her while a seething Kotomi inwardly declares, "Then don't bother coming."

After wishing they all have a good year, Yū hopes that they can all come again the next year and the year after that. Tomoko and Kotomi vocally agree, but Kotomi inwardly concludes that she does not need "this asshole" to come as well, while Tomoko would prefer to come with a boy.

Yū in a kimono. 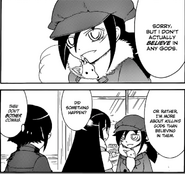