When school ends it starts to rain outside. Yū regrets not bringing her umbrella, and Tomoko quickly offers to share hers. When Kotomi sheepishly announces the she also forgot her umbrella, Tomoko genially tells her there is only room for two.

Yū suggests they wait in the school library to see if the rain will pass. Kotomi agrees whilst Tomoko clicks her tongue. On entering the library, Tomoko immediately sits at a computer and searches for pornographic videos.

Tomoko remarks that older manga used a lot of censored words. After listing some, Yū starts to look up "methamphetamine."

Once the weather clears up Yū wants to go home, but Kotomi asks for a few minutes as she is almost done with her book. Tomoko spoils the book's ending, and says that they can go home now.

Outside, Yū and Kotomi are delighted to see a rainbow. Kotomi exclaims that by waiting they avoided getting wet and got to see a rainbow. Right after she says that, a car passes by and splashes water and mud on all three of them. 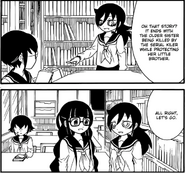 "'Rosebud' was his sled!"
Community content is available under CC-BY-SA unless otherwise noted.
Advertisement