Yūichi Nakamura (Japanese)
David Matranga (English)
Tomoki Kuroki (黒木 智貴, Kuroki Tomoki?) is Tomoko's younger brother. He often does not understand his sister and is bewildered and irritated by her odd behavior. Tomoko occasionally comes to him for advice. He later enters the same high school as Tomoko.

Tomoki is very reserved and distant, even with his family and friends. Despite this, he appears popular in his class and admired by several girls.

Tomoki has messy black hair and dark bags under his eyes like his sister. However, unlike Tomoko, he is considered attractive by his female classmates and by Kotomi as well.

Tomoki once thought quite fondly of his sister and looked up to her quite affectionately. He considered her to be a very kind and caring person as she had helped him when he was in need and for playing with him.

As children during their summers they would catch cicadas together. They built up a collection of them which Tomoki forgets about but later rediscovers. He finds to his embarrassment a piece he wrote at the time where he explains why he loves his sister so much. He is also embarrassed by home movies their mother took of them as young children playing together.

As they grew older they began to drift apart. Part of that can be explains by both becoming teenagers; however, Tomoko specifically began to lord over him winning games to Tomoki's irritation. Despite this, he cares deeply for her well being and demonstrates this by being there for her in her worst moments or at least pretending not to be aware of what may have been said or happened as to lighten the emotional impact. Examples of this can be noticed during the first episode (Chapter 4), when he pretends to not notice her while his friends persist, and then later that night finds her on a swing set and asks to walk her home.

Tomoki's irritation with his sister persists through much of the series. However, when he sees a number of other girls when retrieving his lunch Tomoko brought for him, he starts to conclude the she is not as odd as he thought. By Chapter 160 he seems irritated when Tomoko joins him on his walk to school during her suspension but grudgingly wishes her well on her suspension when she wishes him well in his club activities.

Generally, Tomoki pays little attention to Kotomi despite her crush on him. In the manga, he first meets the middle school aged Kotomi when Tomoko misinterprets her desire to give him a gift as an introduction by saying Kotomi wants his "cock". It seems Kotomi retreats into embarrassed silence until she reaches high school.

In high school, Tomoki continues to appear oblivious to Kotomi. In Chapter 108, Tomoki approaches Tomoko to ask about Kotomi. Tomoko naturally replies that she is "a raging pervert.". Later, when Tomoki sees Kotomi and Akari talking together, he approaches Akari alone to ask what type of person Kotomi is. Despite Akari wanting to remove Kotomi as a romantic rival, she instead decides to be honest and says that Kotomi is, "a very pure person." Tomoki then sees Kotomi talking with his sister who is demanding to know why her brother was asking about her, suggesting with her questions that Kotomi attempted something lewd, and leaving Tomoki to wonder if Kotomi is "a very pure pervert."

He experiences Kotomi's jealousy in Chapter 134 when she sees him with Yoshida. In apologizing to Yoshida for overreacting, she claims she has always looked upon him as a "little brother" to his inward irritation. He further finds the conflict she starts with Yoshida irritating.

Until Chapter 133, Tomoki does not have much of a relationship with or even know Yoshida. When he first sees Yoshida dragging his sister to meet Megumi Imae, he wonders if Tomoko is being bullied. Yoshida notices him looking at her and demands to know what he is looking at. He inwardly concludes that she is a delinquent. He later sees her smiling while looking at pictures of an amusement park that WataMote Wiki stresses is not, in anyway, based on Tokyo Disney. He finds this strange, and Yoshida smiles at him and playfully recalls him as the "punk/kid" she met. In Chapter 133 the two are surprised to find themselves sharing the same water dispenser in the cafeteria. Yoshida once again playfully calls him a "kid" and he cleverly replies. She then puts her arm around his shoulder and asks his name. This earns the jealous rage of Kotomi. In the process of their conflict, she learns his name, and she gives him the nickname "Tomo," while claiming that he can call her whatever he wants. She gives him her first name "Masaki" and insists that he does not use the honorific "san." Unfortunately, when he tries to restrain her when Kotomi reignites her attack, he grabs her by her left breast. Chapter 145 reveals that other class members noticed this.

For a number of chapters there is no indication that the two have any further interaction. After a very involved Chapter 155, Tomoko invites Yoshida to "fuck my brother" as gratitude for driving her home. Yoshida takes this as another twisted Tomoko joke, but then remarks, "you have a brother?"

She recognizes him on the soccer field and makes a note of him being part of the Soccer Club. She next meets him directly when he walks in on her leaving the shower. However, as of the time of this editing, the two have not had a meaningful discussion. In Chapter 194, Masaki sits next to him outside during lunch but is blushingly embarrassed that he does not really talk to her or give her any reaction.

Akari is one of the girls who has a crush on him. She first appears in Chapter 25, adapted in Episode 3, when she blushingly brings homework to his house when he is sick. As with most WataGirls™ who have a crush on him, it remains currently unrequitted. After a comic misunderstanding in Chapter 91, Akari confesses to Tomoki in front of Kotomi and Tomoko that she, too, wants "to see his dick!" to her eternal mortification. However, due to Sayaka's machinations, she and he are chosen to play the leads in their class Cultural Festival. While Akari apologizes to him and suggests that they can withdraw, he brushes this off. His reaction to Sayaka, however. . . .

Sayaka accompanies Akari during her visit with the homework. She encourages Akari to talk to Tomoki. Over the series, she will stick up for Akari with often embarrassing results. She organizes a "Study Date" at Tomoki's home that only serves to irritate him. She volunteers Tomoki and Akari as the lead roles in their class' play for the Cultural Festival to Akari's profound embarrassment. Unable to read the room, she bubbles in excitement while Akari tries to apologize to Tomoki. For his part, he looks at Sayaka and forces a smile that WataMote Wiki cannot adequately describe.

For much of the series the two have little, if any, interaction. After Sachi destroys her group, she finds herself alone. She seeks secluded places to eat lunch where she will not be seen eating alone. She happens to choose the place Tomoki uses to avoid people during lunchtime. She suspects that he is a loner and gloomy, but she is impressed that he does seem bothered sitting near an older girl. They converse, and when she asks him if he knows any girls from her years, he replies that he does. She asks if they are members of his club; he flatly replies that they have been to his home.

With this, Sachi wonders if he is a "playboy (ヤリチン・yarichin)" and suspects that he is hitting on her. However, she also admits that she finds the quiet types who do not just call out to girls attractive. The two will continue to end up having lunch at the same spot. As of this writing, that is where their relationship stands.

Tomoki Kuroki as Tomoko thinks of him.

Tomoki in a baseball uniform. 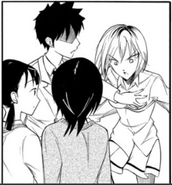 Mr. Kuroki extends his calling card after a formal introduction to Ms. Yoshida 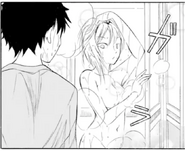 Tomoko imagines a past. 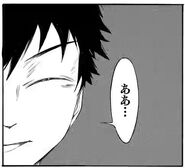