Unknown
Wada (和田, Wada?) is a classmate of Tomoko who first notices in the fast food restaurant in Chapter 4 that Tomoko is a girl wearing their high school uniform.

Wada is a briefly appearing and anonymous friend of Yoshinori Kiyota, Hina Nemoto, and Akane Okada. He does not appear in the anime; his roll and name is taken by Suzuki despite the fact the depiction of Suzuki looks more like him than the manga Suzuki. He does not receive his name until Chapter 135. He takes a more significant roll when he chats with Tomoko about manga in Chapter 144.

Wada appears pleasant, though he does not have a significant role until Chapter 144 where he happily chats with Tomoko about manga.

Wada wears his apparently brown hair long in the manga. Tomoko describes him as a "shota.''

Other than noticing that Tomoko is wearing their high school uniform back in Chapter 4, they have little interaction. However, Wada does not in Chapter 144 that he knows her, and he does not seem to find her strange. When his friend Kiyota remarks that they both read Shonen Jump, he initiates a conversation with Tomoko. He appears pleasant, and while Tomoko notes to herself that theirs were the longest conversation she has had with a boy that is not her brother, she also did not feel her heart "skip a beat," and fears she has no future with a "shota."

For his part, when Yoshinori tells how a boy asked for his contact information when they both cross-dressed as maids for their first year festival, he jokes that he did contact the boy, met with him many times, then reminds Yoshinori about the time in his second year when he complained about his hips and butt being sore. He then confesses that he was making a "Kuroki-style joke."

Kiyota indicates to Tomoko that he, Oka, and Wada have shared classes together. For his part, Wada recalls Tomoko. Hina knows him enough to tease Tomoko about her conversation with him. 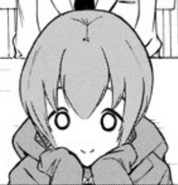 Wada sits in front of Tomoko after the seat rearrangement in Chapter 144. 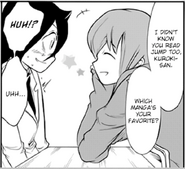 Wada initiates a conversation with Tomoko