With midterm exams starting, Tomoko thinks that the other students will pay attention to her if she does well, but she gives up as soon as she hears that they do not care enough to study. As she listens to the other students plan how they will celebrate the end of the exams, Tomoko wishes doom and destruction upon them. On her way home, Tomoko's homeroom teacher says goodbye to her, but she cannot speak and can only bow to him.

Once home, Tomoko realizes that she can speak to her mother only to dismiss that since even "shut-ins" can talk to their parents. What she needs, she concludes, is practice talking to someone. She coerces her little brother into speaking to her for an hour each day. While opposed to this, Tomoki does try to help her, and he asks her why she does not talk to her friends. She wonders why he believes she has friends. She then shifts the conversation to fantasizing about his sexual conquests with female soccer team managers! When Tomoki demands to know how long he has to have conversations with her, Tomoko responds until she manages to find a boyfriend. He feels this will be a life sentence.

Tomoko then asks "the question" for every girl in a manga or anime: "Do you think I'm cute?" He mutters that she is "average," which generates a slew of questions demanding exactly what degree of "average" he means.

Three days later, she gazes into a notebook in which she wrote that it has been 43 days since anyone has talked to her. Her homeroom teacher dismisses them, and she manages to say a nervous goodbye to him. Feeling successful at having had a “totally natural conversation with somebody," Tomoko decides to buy some ice cream on the way home. She also chooses to buy some for Tomoki since she credits him for her ability to speak to someone. At the checkout, Tomoko gets nervous when she realizes the cashier is a cute guy, and she only manages to whisper two things to him, one of which he does not hear. Outside the store, Tomoko is amazed that she had a “normal conversation with a cute guy," though wonders if she should have considered that a "conversation." 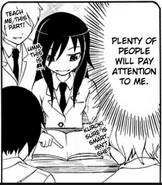 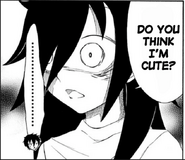