Kii walks in on Tomoko playing an otome game. As Tomoko throws her body infront her screen, Kii explains she needs to go to a library to prepare a summer book report. As she waits in the lobby playing a game on her phone Kosaka walks by and remembers her. As she stammers and shakes in nervousness, Tomoko learns that he is the one who left the umbrella for her on that rainy day and he frequents this library.

He introduces himself, and she haltingly stammers her name. Kosaka suggests the nickname "Momoko-chan." Tomoko is overcome; however Kosaka finds her reaction a bit "weird." He leaves soon after and Tomoko gets the misimpression that he is interested in her.

Kii finishes getting her books, and they decide to walk back home. On the way home, Kii asks if Kosaka is the boyfriend Tomoko boasted about. Thinking that it is not a lie since he might become that, Tomoko claims that he is.

The next day, Tomoko and Kii go back to the library to return the book but are shocked to see Kosaka sharing an umbrella with a girl. Distraught, Tomoko tells Kii to return the book while she hides out in the bathroom playing with the toilet paper as her mind tries to recover. Unbeknownst to her, Kii walks over to Kosaka to confront him. Tomoko eventually rationalizes that if he cannot become a boyfriend, she can at least have a friend who is an older boy. When she exits the bathroom, she sees Kii confronting Kosaka about his unfaithfulness towards Tomoko to the point she asks him if he is just using Tomoko for sex! Kosaka has no idea what is going on, and a frantic Tomoko finally steps in to ask Kii if she may talk to Kosaka privately.

Thinking Kii is not watching, Tomoko finds no other recourse but to formally apologize to the confused Kosaka. She then lies to Kii implying that she got rid of the guy, but notices that Kii is looking at her as if she were trash. 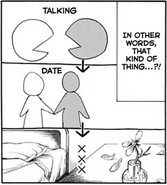 Tomoko's mind runs in one direction. 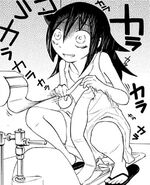 Tomoko losing her mind in the bathroom