Tomoko has noticed that since the library incident, Kii has looked at her completely differently. She does not want to pretend that Kosaka was really "just some guy" she thought about going out with in the future, because she fears Kii with think she is a "slut who sleeps with anyone." However, since her aunt, Kii's mother, arrives the following morning, Tomoko feels that day she must redeem herself as Kii's oneechan.

Tomoko takes Kii to an "awesome" place: a store that sells candy. She offers to buy Kii the equivalent of one to two dollars' worth of candy which leaves Kii suitably unimpressed. The store also hosts card games. Somewhat embarrassed, Tomoko points out that she is the highest ranked player known as "Queen." This does not seem to impress Kii either; however, a number of kids recognize and greet Tomoko as "Queen." That does seem to impress Kii a bit, except she quickly figures out that she played with little kids even though she was in her last year of middle school.

This visit soon becomes clearly part of Tomoko's plan to impress Kii. She refuses play with an unranked kid and, instead, insists on playing a Yocchan, the strongest player present. She opens her black shirt to reveal a holster for cards. Kii inwardly recognizes that Tomoko must have dressed in a long-sleeve shirt to carry her cards. As Tomoko plays, Kii begins to worry that her cold attitude towards Tomoko has affected her. Meanwhile, Tomoko appears on the verge of losing, as one of the kids claims she always draws just what she needs.

Indeed, Tomoko's right hand drops below the table. She then deftly draws a card with her right hand by substituting a card from her sleeve. Only Kii sees this. Naturally, Tomoko wins with this card to Kii's horror. Nevertheless, Kii takes pity on Tomoko for having to stoop so low and decides to be kinder to her from then on. The next day after Kii gets picked up by her aunt, Tomoko wonders why Kii looked at her as if she were a pitiful puppy.

The ending narration observes: "She became a fake Queen...!!" 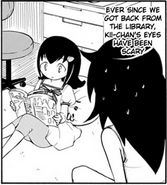 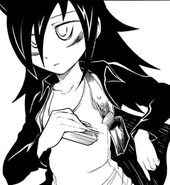 Tomoko's card battling outfit
Add a photo to this gallery

Retrieved from "https://watamote.fandom.com/wiki/WataMote_Chapter_016?oldid=18115"
Community content is available under CC-BY-SA unless otherwise noted.