The chapter opens with the statement "Because it's summer, being alone is fun," as Tomoko sits playing with a frog.

The scene changes to a sweaty and tired Tomoko in a line inwardly complaining how hot she it. She stands in line to shake hands with an otome game voice actor. In addition to getting a handshake, if you buy the game "Saint Time" he will record his voice. Tomoko thought him a minor character, but watching how he welcomes each girl who approaches him, she find him unexpectedly "cool." She decided on the line she wants: "I love you, Tomoko."

Yet, waiting in line, she hears other girls make requests. One asks him to say he will "beat the shit" out of her, which he does. Tomoko finds it embarrassing, but she then wonders what else he would say. She imagines a number of examples: "Haa . . . Haa . . . Tomoko! Tomoko!" "Shall I kill you?" "This Bitch!!" "Your hair smells really great Tomoko!" "Your body's really warm Tomoko!" "You smell terrible Tomoko, don't come close to me" and "Where would you like me to touch you? Please tell me." Tomoko stuggles over what to ask him to say only to find she is next.

A completely nervous Tomoko is impressed that he shakes her hand without a flinch despite her palm being sweaty. She then spews a combination which includes: "This bitch smells terrible . . . just kidding actually Tomoko's hair smells really great and I love how silky it is!" The voice actor happily complies, as Tomoko apologizes, and two girls behind her sweat.

At home, Tomoko listens to the recording on repeat with increasing delight. At the height of her "moment," Tomoko decides to also play the game. She then gets the bright idea to mix her voice and his recorded sayings together so that it will sound like the game character and her converse.

Her mother naturally walks in on her saying she thought she heard Tomoko talking to someone. As "Fufu, what does it feel like to have your freedom taken away by the man you hate?" plays, Tomoko realizes to her horror she did not plug in her headphones into the correct jack, and the dialogue plays on her stereo.

Tomoko's mom simply tells her that dinner is ready and she should come down then leaves her. In her mind, Tomoko imagines the voice actor holding her, telling her she did well, as Tomoko touches her head with the hand he shook as the manga concludes stating she "went to the other world." 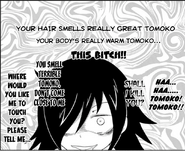 Tomoko thinks of things for the voice actor to say.

A teen's worst nightmare.
Add a photo to this gallery

Retrieved from "https://watamote.fandom.com/wiki/WataMote_Chapter_017?oldid=18114"
Community content is available under CC-BY-SA unless otherwise noted.