The full opening page depicts Tomoko walking down a school corridor filled with students working on scene pieces for the cultural festival with the narration, "I don't get how I'm suppose to have fun here," hangs over her head.

The narration continues to explain that it the day before the culture festival and the preparation for it "is suppose to be the most fun thing in the world and yet. . . ." Tomoko sits and watches by herself lamenting that she has nothing to do and want to go home. Inwardly, she condemns all around her for having fun. She eventually realizes that she needs to help out at least once or the other students might say something about it. Blushing and stuttering, she offers to cut out some flyers.

Tomoko plans to take as long as possible on the flyers, but two guys ruin her plans by helping her. Listening to other girls talking about costumes, Tomoko fantasizes about being asked to try some on and being told she looks "cute." Distracted, she cuts herself, sending her to the nurse’s hospital to get bandaged.

Tomoko sadly rationalizes she can avoid further participation given her injury. She begins to walk around the school and imagines joining in with some of the clubs like the Light Music Club. She then imagines the other members denigrating her behind her back.

She hears an announcement asking students to help set up the gymnasium. Though she is not sure why, Tomoko decides on her own to join in setting up chairs. After she finishes, Megumi thanks her and tells her to have fun. Tomoko questions, "Have fun. . .?" in her mind.

She returns to her class, where the boys who helped her with the fliers inform her that all of the preparations are done and she can go home. Tomoko pauses outside the "Cosplay Cafe." She then looks sadly at the costumes hung on a rack.

She then walks to a costume store, buys a simple maid costume, then takes a picture of herself in it. She sends it to Yū, claiming she will be playing a maid in the culture festival: "It's really embarrassing!"

An excited Yū calls her and invites herself to Tomoko’s culture festival. 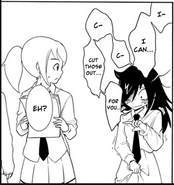 Light Music Club Tomoko: No word on her cake.