The full page depicts Tomoko staring out a window at the culture festival with the narration "To ride or not to ride, this big wave that's coming" above her. The next page continues the narration: "Now that the cultural festival has started, how should she pass the time. . . ?" It explains that the festival lasts two days. On Saturday, only the students may participate, but on Sunday anyone may attend.

This day is Sunday.

Tomoko again watches without participating. She rationalizes that there was nothing she could do the day before, which was "the worst day of my life." She was convinced to buy takoyaki then participate in swaying during the Light Music Club performance which caused her to throw up. She then sat in a corner and waited for the festival to end.

Today she knows that Yū will come. She rationalized that she may enjoy the festival with her, but she fears introducing Yū to others since Yū might discover what others think of her. Yū texts her, and Tomoko sheepishly goes to meet her. Yū enthusiastically hugs her. Tomoko, still unable to understand interactions, misinterprets Yū's hug. She fears that others will see Yū "pressing her breasts" against her, but she thinks she should grab Yū's posterior in return. Yū pulls away before this happens. She is surprised that Tomoko is not cosplaying a maid, but Tomoko claims she did it the day before. From a distance, Akane Okada watches them silently wondering who Tomoko's friend is.

As she walks with Yū, Tomoko inwardly wishes Yū would hug her again, not for sexual reasons, but because when Yū hugs her her sadness and loneliness go away. Despite that, Tomoko still finds Yū's sudden hug "weird." Tomoko suggest the "haunted house," and inwardly hope Yū will hug her again out of fear. It fails to scare either of them, to Tomoko's irritation, and Tomoko decides to buy Yū treats. They eat together with Tomoko inwardly regretting that Yū bought her some treats rather than hug her in gratitude. While they eat, they see a costumed puppy figure giving balloons to children. Yū suddenly starts discussing an anime Tomoko recommended to her and suggests they should watch the movie adaptation together when it is released. Tomoko then takes her to view the Manga Club's illustrations exhibit.

Yū's phone rings. She then meets her friends at the entrance, leaving Tomoko alone. Tomoko weakly waves goodbye then sadly notes that there is only one more hour until the festival is over.

Megumi Imae thanks the girl wearing the large puppy costume and asks to borrow it. Tomoko sits alone looking at her phone. Suddenly, this costumed character approaches her, gives her a balloon, then hugs her.

Tomoko watches the costumed character leave wondering what the hug was about as the public address announces the end of the festival.

The narrative note asks, "The one who granted Mokocchi's wish was. . . ?" 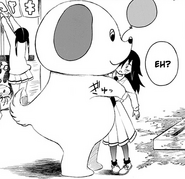