After the cultural festival, Tomoko tries to settle into a routine. She notices that if she does not leave her desk during lunch, her seat will not be stolen. As she eats lunch, she overhears some classmates talking about pictures they took during the culture festival. She cannot help but think they talk about her. She inwardly states that she does not care, but the narration notes, "she said she's not interested but. . . ."

A few days later, Tomoko plays in an arcade. She notices a photo booth that promises to make one look prettier. She watches a bunch of girls eagerly enter it. That night, lying in bed, she thinks about the booth. She tries to invite Yū but she is busy studying for a test. She then enters Tomoki's room to invite him, but he immediately rebuffs her.

The next day after school, Tomoko slowly approaches the booth. Making sure no one is around, she runs int. Unfortunately, Tomoko cannot keep up with the automatic requests of the booth. Typically, Tomoko seeks to blame others for failure: she blames her brother for not accompanying her. As she laments spending 400 yen, she looks at her pictures. She compares them to the advertised pictures of girls and boys.

The scene shifts to Tomoko placing pictures in a room. It is revealed that covered Tomoki's room and skillfully replaced faces in some of his posters with her face. As Tomoki reacts in shock, the narration asks, "is her brother going to leak those pictures?!" 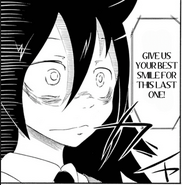 Tomoko's Pictures
Add a photo to this gallery

Retrieved from "https://watamote.fandom.com/wiki/WataMote_Chapter_022?oldid=18107"
Community content is available under CC-BY-SA unless otherwise noted.