This chapter takes place in one day but is split into several sections with different subheadings for each. The opening full page has the narration: "Spending my days in melancholy."

Going to School in the Rain

At school a girl complains about how the ruins her hair. A boy she likes passes by and she becomes embarrassed. Tomoko, who has hair sticking out in every direction wonders why she complains.

In class, two girls discuss a psychology test which has the person pick one out of three possible paths in a dream: 1. Go in the thicket on one side. 2. Go into the forest on the other side. 3. Run home in fear.

During math class, a panicked Tomoko realizes she forgot to bring her textbook. Her social anxiety prevents her from asking either of the guys next to her to share their book with her. She tries to harness her power to go “Stealth Moko.” Her plan fails miserably, and she gets lectured by the teacher which makes her cry.

After school while it rains heavily outside, Tomoko cannot find her umbrella. She dramatically curses the people who steal umbrellas and rants about suffering and annihilation only to find her umbrella a moment later.

On The Way Home

While she walks home in the rain, Tomoko crosses a bridge but she stops to admire the overflowing water below her. An adult pulls her away and lectures her on the dangers of being so close to a waterway. Overwhelmed by the events of getting lectured by two old men in one day, Tomoko cries again.

At home, Tomoko sends Yū a message about the psychology test. She becomes horrified when Yū texts her back with her choice of the third path. The side notes state, "It's just a psychology test in the end though." 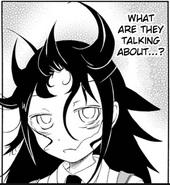