The chapter opens with Tomoko commuting to school on a train with the narration: "The morning train to school is a battleground." The train soon fills, and Tomoko finds herself squished up against the glass of a window.

In class Tomoko overhears Okada and another girl share stories about getting molested on the train. The unnamed girl claims there is always "this guy" who tries to take the seat next to her. Tomoko privately judges them, thinking they are implying that only pretty girls, unlike her, get molested.

The next day, Tomoko notices how no one sits near her on the train and becomes self-conscious. She sits in her room lamenting that no one would sit next to her nor molest her. She then stands in front of her mirror as if she is standing on a train and grabs her own behind. Wondering what she is "missing," she calls Yū and immediately blurts out the question if she has ever been molested. To explain this question, Tomoko nervously lies that a man "rubbed my butt a bit." Yū does not consider this a small matter; she explains she has traveled with other girls since "there were some perverted people back when I was in middle school though." This revelation stuns Tomoko who immediately concludes that every other girl in high school has been molested except her then wonders if it is a right-of-passage into womanhood!

The next day, Tomoko reassesses the concept more rationally. She accepts it is better to not be molested and wonders if she is a respectable woman a molester would not bother. As the passengers crowd together, she finds herself so compressed her feet cannot touch the ground. As people shift, and she can descend so her feet can touch the floor, she feels a "rod or something" between her legs. When the train stops and the doors opens, Tomoko thinks she can escape, but the "thing" between her legs will not allow her to move forward. It appears, in her mind, to "curl up." Tomoko panics but cannot muster the ability to ask for help. She rues ever fantasizing about being molested.

She then feels severe pain as "it" moves violently, and Tomoko inwardly screams that she is not being "molested," she is being "raped." She grabs herself, still unable to call for help, then vows to do something herself. Clutching herself and "it" she forces herself to the door and calls to two anonymous men trying to enter the train that she has "caught" a molester. She then realizes that the foreign object was actually a practice naginata that got stuck underneath her when the train became crowded.

Later that night, she calls Yū to excitedly report that she was "raped by a spear today!"

The ending narration reminds: "Molesting is a crime!!" 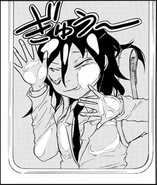 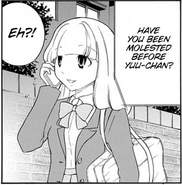 Tomoko imagine what is between her legs.

Tomoko's "Molester" revealed!
Add a photo to this gallery

Retrieved from "https://watamote.fandom.com/wiki/WataMote_Chapter_024?oldid=18103"
Community content is available under CC-BY-SA unless otherwise noted.