It is 2 A.M. and Tomoko decides to read "one more" internet article before going to bed. She reads one that claims sleeping face-down increases the chances of having a "wet dream." She tries this but ends up having a nightmare about bugs. She tries again with her stuffed cushion in her shirt only to awake screaming about a gorilla. Further attempts result in more nightmares, and Tomoko gets little to no sleep.

The next morning, a tired Tomoko falls asleep while taking a quiz. Her teacher approaches to see if she is ill but stops and turns away when he looks at her face. 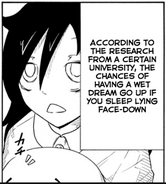 Tomoko aces her quiz, so to write. . . .
Add a photo to this gallery

Retrieved from "https://watamote.fandom.com/wiki/WataMote_Chapter_027?oldid=18100"
Community content is available under CC-BY-SA unless otherwise noted.