The main page depicts Tomoko dressed as a maid serving a strawberry cake with the caption "I Want to Live a Sweet Life" above her head.

Tomoko arrives and is startled by Yū's uniform. She orders a piece of cake and compares to herself how she wasted her previous day inside playing games while Yū worked in a fashionable place. As she eats, wonders if her working in such a place is the reason Yū is different from her. Yū interrupts her thinking to wipe a bit of cream off her face. Tomoko concludes she can use Yū as a model and surround herself in a "fashionable atmosphere."

At home, Tomoko begs her mom to let her accompany her at her part time job making cake. Tomoko then daydreams over an imagined young baker and her "baking" together, which, naturally, involves him pouring cream all over her so he can lick it off. However, she ends up working an assembly line of food factory rather than a small cake shop. During a break, she sits stunned and disillusioned. The narration congratulates her: "Mokocchi! Good work!" 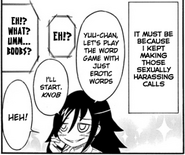