It is Tomoko’s 16th birthday, and she walks to the coffee shop thinking about how she has become more of an adult. She is celebrating by meeting with Yū at the coffee shop. She arrives an hour early and further muses over how mature she has become by reading adult novels instead of manga and drinking black coffee. She sees a motorcycle and imagines, as a "woman" how cool she will look, only to crash and end up in intensive care in her imagination! She then muses about marriage and having a family--at 16!: "It's definitely possible for an adult woman like me." Her mind then wanders through the difficulty of raising children, then her mind focuses on and keeps repeating "I don't wanna work!"

Her thoughts are interrupted by Yū's arrival. Yū gives Tomoko the perfume she smelled when she shopped for underwear as a present. Tomoko finds this a "mature present." They catch up a little bit, and Yū suddenly asks Tomoko what “XXXX” is, something a friend of hers said. Tomoko takes this chance to show how mature she is by acting unfazed as well as being knowledgeable on the topic. Yū blushes as she listens. Tomoko asks Yū why she suddenly wants to know what it is, and a sweating, blushing Yū say "a friend" said it, and she could not find it in a dictionary. To herself, Tomoko wonders, then starts interrogating the embarrassed Yū if her boyfriend did things like "XXXX" with her, which Yū denies, then asks if "her friend" could have done "things other than just XXXX." Shifting, Yū admits that "her friend" could have done "some other things."

Eventually, Yū stands and says she wants to tell Tomoko some of the things "her friend" has done that "she" does not want other to know. She whispers into Tomoko's ear for a number of panels as she smiles and Tomoko looks both excited and shocked.

Tomoko gives her book to Yū since it is more suited for her. She watches Yū leave, smiling, accepting she is still a kid, but vowing to "slowly climb the stairway to adulthood." 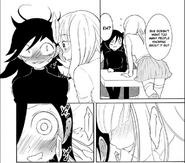 Having heard of maturity, Tomoko vows to begin to slowly grow up.
Add a photo to this gallery

Retrieved from "https://watamote.fandom.com/wiki/WataMote_Chapter_036?oldid=15961"
Community content is available under CC-BY-SA unless otherwise noted.