This chapter is broken into smaller parts.

On the way to school, Tomoko observes Megumi greeting students as they go to their class. The side-narration asks, "Now that she's become a second-year, have things changed a little bit?" Tomoko hangs back thinking that since she once saw Megumi's panties, meeting her will be awkward.

Suddenly, Ogino surprises Tomoko with a greeting and forces Tomoko to greet her back. She keeps making Tomoko repeat her morning greeting until she is able to say it loudly and clearly. She continues to embarrass Tomoko by publicly asking if she has made any friends yet. Almost on cue, Megumi intervenes and declares that they are friends. Tomoko inwardly finds Megumi patronizing. Ogino deems this unacceptable since Megumi is a third year. She continues to further embarrass Tomoko by revealing to Megumi that Tomoko is always alone in her class. At this point, Tomoko leaves while the two continue to argue about her.

In class, Tomoko reflects on her social growth since last year. She notes that she sometimes talks to Hina and even the Kuroki Level has died down. She observes two girls talking and stands dramatically, only to walk over and stammeringly offer the ingredients for next period's home economics class and excuse herself for feeling sick. Lying in a cot in the nurse's office, she smiles that unlike the previous year, she can find the courage to hand over her portion of the ingredients.

A male student lies in an adjacent cot with his left knee bent and elevated such that it creates a shadow which Tomoko naturally severely misinterprets.

From Sorrow to Joy

To her relief, the boy leaves the nurse's office. She notices that the nurse is also absent, and, bored, she decides to poke around. She finds the nurse's laptop which contains all of the first-years' health examinations. Her expression changes from sad, to shocked, to pleasure as she reads.

During lunch, Tomoko’s classmate, the unnamed Mike to whom she gave her ingredients, offers her food she made during the home economics class. Tomoko lies, telling the girl that the food tastes good. The girl happily chirps that it is left-overs from the food she made for her boyfriend; she does not know how to cook, but he insisted he wanted to try her "home cooking."

With a transfixed smile, Tomoko finishes her meal then excuses herself to go to the bathroom where she promptly throws up as she mentally curses the girl’s boyfriend. Afterwards, Tomoko staggers back to class to retrieve her bag so she can go home and recover. She sits in a bathroom stall for a moment and absentmindedly plays with the toilet paper roll.

Recovered, Tomoko leans over the school balcony watching the sunset and listening to the sounds of students engaged in after school activities. She then overhears someone throwing up and assumes that it is her classmate’s boyfriend.

Sometimes a knee is simply a knee, Tomoko. 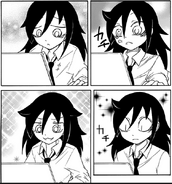 Tomoko researches the breast sizes of her classmates . . . for Science!

Retrieved from "https://watamote.fandom.com/wiki/WataMote_Chapter_042?oldid=16955"
Community content is available under CC-BY-SA unless otherwise noted.