While Tomoko is in the bathroom, she overhears two girls gossiping about their friends having sex. They later talk about whether they have seen a guy naked before. Neither have.

At home, Tomoko ruminates on the conversation as she sits with her two stuffed pillows. She suddenly declares she will rise above the two girls who have never seen a guy naked, and then storms into her brother’s room to demand he show her his "dick."

Tomoki directs her to engage in intimate relationships with herself: "Fuck off!" Tomoko continues thinking that he wants to see her naked first. Tomoki can only rhetorically ask if his sister ever understood him. Undaunted, Tomoko suggests that, though it has been a very long time, they should take a bath together. A further stunned Tomoki demands she stop acting "creepy," which Tomoko finds insulting. She tries to argue that any guy who views seeing his sister naked is the same as seeing his mother naked "must be secretly perverted." Tomoki ask her to take a step back, which allows him to slam his door shut in her face.

The next day in class, Tomoko sits and stares at two boys talking. As Ogino takes roll, Tomoko realize that she cannot concentrate due to her curiosity about male genitalia. She decides to search for pictures of "big dick" on her phone's "Gaagle" browser, even though she knows this will not elevate her above girls who have never seen the real thing.

Nemoto suddenly asks her what she is looking at which cases Tomoko to drop her phone. In an attempt to recover it, she misses and kicks it to the front of the class where Ogino picks it up and meets every element of the definition of "freaks out." Ogino holds up the phone, which reveals its contents, as she furiously demands the owner of the phone to meet her outside immediately.

As some students "Woah!", laugh, or protest they cannot see, the narration notes: "Of the fraction of girls who have seen a naked guy (penis), Kuroki-san is now well-known to be one of them." 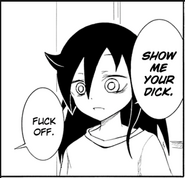 Ever understanding, Ogino offers to calmly discuss matters with girls coming of age. . . .
Add a photo to this gallery

Retrieved from "https://watamote.fandom.com/wiki/WataMote_Chapter_043?oldid=18239"
Community content is available under CC-BY-SA unless otherwise noted.