Back in school, Tomoko happily receives her average midterm scores of between 68% and 76% which she feels will safe her from preparatory school. On her way home she passes the cafe and muses over how the man never returned. She is, however, grateful for that experience because it encouraged her to finally study. Feeling she can take a break from studying, she starts rewatching the series at home while thinking she should at least moderately live up to people’s expectations. As she rewatches the anime at home alone, she finds it rather boring. 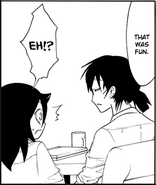 Retrieved from "https://watamote.fandom.com/wiki/WataMote_Chapter_044?oldid=11409"
Community content is available under CC-BY-SA unless otherwise noted.