Tomoko becomes bored so she decides to mess with her brother. She sits down in his room while he tries to read a manga and lies about having a boyfriend: a "real one," not one from an otome game. When that fails to impress him, she then tells him about a passageway between the school’s north and south building, and repeatedly forbids him from going there, claiming that it is because that is where she eats lunch with her boyfriend, in an ultimately failed attempt to make him jealous.

The next day, while Tomoko eats lunch there two male students walk through. They make a comment about how unusual it is for someone to eat there as they pass.

A few days later, Tomoki goes to the passageway and finds Tomoko who scrambles to get a piece of paper from her pocket with the word “punk’d” written on it. Her prank generates no reaction from Tomoki. She resumes her seat and asks him to wait for her to finish her lunch. While he waits, he admits sarcastic surprise to learn a passageway exists between the two buildings. Tomoko offers to show him other places, he rebuffs her. 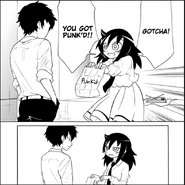 Tomoki is unimpressed.
Add a photo to this gallery

Retrieved from "https://watamote.fandom.com/wiki/WataMote_Chapter_045?oldid=18265"
Community content is available under CC-BY-SA unless otherwise noted.