The single panel page depicts Tomoko sitting with her legs in the school pool while holding a hose and wistfully thinking, "Nothing much has changed from when I was in middle school."

Tomoko goes to the school library to find a book. The narration reads: "Someone unnexpected appears before Mokocchi." Tomoko, stammering, asks the student librarian to check out a book. Kotomi, the librarian, is surprised to realize Tomoko is in her high school. Sweating, Kotomi talks about their middle school days, but Tomoko has no idea who she is. She can remember Yū Naruse and another heavy-set girl named Kawamoto who both wore glasses, but she can only remember a pair of glasses for Kotomi. After struggling to remember something more than a pair of glasses, Tomoko guesses that Kawamoto lost weight, and given an incident where she sneezed her stew into Kawamoto's face at lunch, she understands why the girl takes such an attitude with her.

Tomoko greets Kotomi with Kawamoto's name. Kotomi corrects her and realizes Tomoko has no memory of her. Forcing a smile, she hands Tomoko her book as Tomoko notices Kotomi's name on a sign identifying the week's librarian.

As she walks the hallway, Tomoko struggles to remember Kotomi. Finally, she unites her memory of glasses with Kotomi and realizes she was a friend of Yū which was the only reason Tomoko had any association with her. Tomoko then wonders if she ever did somthing to Kotomi to make her hate her.

Meanwhile in the library, Kotomi inwardly rages against Tomoko for forgetting her after what Tomoko had done to her.

At home, Tomoko finds Kotomi's picture in her middle school yearbook. She thinks she is sure that Kotomi did not have any friends. She happily surmises that since Kotomi is a loner like her they should get along.

The narration asks "Just what happened to those two in the past?!" 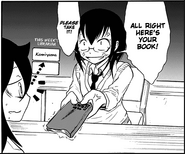 Kotomi: Service with a Smile