The chapter is divided up into short sections.

Tomoko wakes up early and gymnastically leaps from her bed feeling good since she went to bed early. "Today is going to be a good day," she concludes. She eats breakfast with her brother as she pesters him with questions. He mentally notes that today is going to be a bad day because of her.

As she leaves, Tomoko is told by her mother to take two umbrellas with her, one for herself and the other for Tomoki. She heads out to school but then gets distracted by an inchworm while crossing a waterway. She starts practicing sword draw at the hanging inchworm with her brother’s umbrella only to miss and fling it into the water.

During school, Tomoko can see Hina's bra in the light through her shirt. When school is over, Tomoko sees no signs of rain so she throws her umbrella at Tomoki, striking him in the back, smiles like an anime hero, then runs away.

At her train station, Tomoko decided to go to a manga cafe to look at books. While on an elevator she notices a girl and a boy together. After everyone leaves, the boy starts to caress the girl's hair, but she stops him when she notices Tomoko standing in the corner of the elevator behind them with her back to them.

In her nook at the cafe reading a manga, Tomoko overhears the same couple playfully arguing as they get affectionate. Tomoko inwardly rants about how everything is recorded by hidden cameras but still sneaks to take a peek into the couple's cubicle while being recorded.

Afterwards, she goes to the train station and sends a message to Tomoki telling him to bring an umbrella because it started to rain. She squats down in front of the ticket machine to make it impossible for him to get through without her noticing him as she reads a manga. He intentionally walks past her.

Tomoko stops Tomoki and playfully asks him if he is being "tsundere." He inwardly regrets that she saw him. As they walk home together, Tomoko boasts about how good it was that she brought him an umbrella. When he asks why she did not bring her own, she points to the umbrella in the river and says it is his: "thank me." She then describes what must have been a terrible day for him made better by her.

After a full night's sleep, Tomoko wakes happy and optimistic! 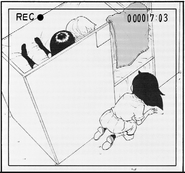 Retrieved from "https://watamote.fandom.com/wiki/WataMote_Chapter_053?oldid=17423"
Community content is available under CC-BY-SA unless otherwise noted.