The single page a depicts high school age Yū happily running while dragging along Tomoko and Kotomi while all are dressed in their middle school uniforms. The narration asks: "Are the bonds of friendship everlasting?"

On her way out of the school, Tomoko runs into Kotomi and they have an awkward moment of silence. Nemoto with passes by with Okada and calls out a goodbye to Tomoko while Okada looks suspiciously. Tomoko stammers an embarrassed reply then looks with a meak smile at Kotomi, who concludes that Tomoko is gloating. Kotomi turns to leave and Tomoko, who happens to be going the same way, follows closely. Kotomi stops to demand why Tomoko is following her since it is quicker for Tomoko to return by train. Smugly, Tomoko declares that, "Unlike you Komi-something-san," she is meeting a friend.

They take the same bus and Tomoko strategically sits behind Kotomi to annoy her. She recognizes the book Kotomi is reading and spoils the ending for her. Just as Kotomi is about to snipe back, a boy from her class leaves a library book with her, despite her protests that he bring it back to the library himself, and then gets off the bus. A stunned Tomoko stares at her and then asks if she is "satisfied now." She tearfully claims that the confused Kotomi thinks she is superior because she can talk to a boy casually. Tomoko then claims that her "popularity" only comes from her being a librarian. Then both leave the bus at the same stop, and Tomoko continues to harangue Kotomi that she has "charisma" and will meet a friend from middle school unlike Kotomi. Nevertheless, Tomoko storms off clearly upset. The still confused Kotomi wonders how Tomoko could be her crush's sister, but she then thinks on the words, "a friend from middle school."

Curious about whom Tomoko is meeting, Kotomi follows her to a café and sees Tomoko sitting happily with a girl inside. Looking at the girl from behind, Kotomi muses that the girl looks different from they way she remembered. The girl, Yū, stands excusing herself to use the bathroom but sees Kotomi, who does not recognize her. Yū recognizes Kotomi. The three sit together with Yū smiling and Tomoko and Kotomi at first silent and sweating. While Kotomi answers Yū's many questions, Tomoko inwardly seethes in jealousy. Suddenly, Yū turns to Tomoko and asks why she never mentioned she attends the same high school as Kotomi. Tomoko admits they they only just found out, but a delighted Yū takes their hands and looks forward to all three of them talking together as they did in the past. She then remembers she needs to use the bathroom, leaving Tomoko and Kotomi alone for a moment.

Tomoko immediately demands Kotomi leave; Kotomi refuses. Tomoko declares that since Yū did not contact Kotomi, she does not want to be Kotomi's friend, while Kotomi protests her phone number changed. Kotomi retorts that if Tomoko was not Yū's friend and Tomoki's sister she would never talk to her. Tomoko returns that Kotomi is "gross" for having a crush on someone's younger brother. She wonders why Kotomi would have a crush on an "ugly and boring guy who just tries to act cool" and who she implies could be homosexual or lusting after his own sister, which provokes Kotomi to grab Tomoko by her shirt collar. As Kotomi threatens Tomoko to never disrespect her brother, Yū returns and witnesses them.

All three sit nervously for a moment.

Inwardly, Tomoko and Kotomi blame the other for their behavior in front of Yū. Yū nervously asks them if they can go to another place. She takes them to an arcade. She reminds them both that they use to have fun playing in that arcade. Tomoko promptly destroys an irritated Kotomi in one game. Yū reminds Kotomi that she was always good at trivia games, and Kotomi takes the opportunity to note that "unlike a certain slacker" she did not have the time to play games all day, which Tomoko notices. Kotomi beats them both easily. Kotomi takes the opportunity to ridicule Tomoko for only being able to answer anime and video game questions. In response, Tomoko "invites" her to play a shooting game and easily beats her. Kotomi tries to explain that her "specialty" lie in puzzle games "that require you to use your brain."

Later as they walk together, Yū happily remarks they had fun and should do it again together during the summer break. Tomoko and Kotomi, while looking at one another, sheepishly agree. Yū declares this a promise. When she leaves, Tomoko and Kotomi promptly separate. As Tomoko walks home, she receives a text from Yū asking her to get along with Kotomi.

The next day, Kotomi sees Tomoko at her school locker then looks at her phone. She nervously greets Tomoko who stammers back a greeting. While Tomoko recalls that, once, they talked together, she mentions that the day before was fun. Kotomi agrees, thinking that she never really wanted to get along with Tomoko: "But we just ended up trying to get along back then too." 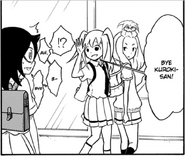 Tomoko is "delighted" as Yū and Kotomi renew their friendship. 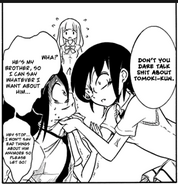 What . . . Tomoko and Kotomi got here is "failure to communicate." 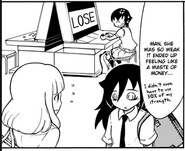