Tomoko runs to school and ends up arriving late regardless. She inwardly blames a cartoon she happened to watch that morning. Nemoto comments on Tomoko’s sweaty appearance and offers her some deodorant. Tomoko refuses saying her sweat will evaporate soon. However, Nemoto reminds the that they have physical education the next period.

During second period, Tomoko has to play basketball. Okada passes the ball, and Tomoko attempts to punch the ball to make a cool anime pass but only succeeds in spraining her wrist. Afterwards, Tomoko notices how even the boys are using a lot of deodorant. She goes to the bathroom and checks on her smell, wondering if she was smelling from sweating all day. She cannot really tell, but then she remembers Nemoto offering her deodorant and imagines that Nemoto thought she smelled.

Back at home, Tomoko goes to Tomoki’s room and waits for him to come back. When he comes in, she asks him to smell her. He refuses and Tomoko gets annoyed that no one will tell her bluntly if she smells. After a bath, Tomoko remembers the perfume Yū Naruse gave her. She sprays it on her purple stuffed toy and it becomes Yū for her.

The next day, while Tomoko walks to school on a very hot morning. She goes to the girl's room and drenches herself in the perfume Yū gave her. The odor is so strong that her classmates find it hard to concentrate on their work. Tomoko sprays herself again after P.E. so that she will only smell of perfume instead of sweat. She then walks down the hallway and passes by Tomoki who tells her she smells terrible.

The reason Tomoko was late. 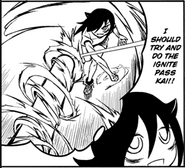 Tomoko believes she can execute an anime style pass.