Mrs. Kuroki drops Tomoko off at Kii’s house for a few days. Kii takes Tomoko to her room, where she gives Tomoko a makeover, with a new dress and a new hairdo. This scene serves as a single page with the narration: "Isn't there something wrong with this picture?" Kii gives Tomoko an expense dress to wear in order to "look like a fashionable lady." Tomoko remarks that she already is one, to which Kii calmly insists she wear it anyways.

Tomoko relents, and Kii then suggests that she do Tomoko's hair. As Kii prepares, Tomoko notices that Kii has a number of glamor magazines with parts marked. One page consists of an advice column where a "K" writes for advice regarding her "older sister" who has no boyfriend and plays with kids far younger than her! Kii returns and suggests she do Tomoko's hair such that two loops resemble ears. Afterwards, she insists on taking Tomoko for a walk to a place where "everyone" can see how cute she is.

In inward horror, Tomoko realizes that Kii is treating her like a dog. In a vain attempt to regain dominance, Tomoko challenges a confused Kii to a sumo match. However, Kii merely stares at Tomoko with a smile and responds, "don't wanna," and Tomoko is subdued.

Her suspicions continue when Kii ends up taking her to the park. Kii tells Tomoko, as she places Tomoko's hand on a railing, to wait there while she goes somewhere else for a bit. Tomoko immediately connects this to an owner tying a dog to a railing so he can go shopping. It does not take Tomoko long to notice that there are girls getting hit on by guy. She assumes that Kii did the same to her like she would to a dog. She looks and sees Kii watching from the entrance of a store.

Kii approaches her with a sad face. As they walk back to Kii's home, Kii consoles Tomoko by saying the guys at the park had no taste. Tomoko takes it as an insult since the situation reminds her of matting dogs. To reverse the situation, Tomoko attempts to show-off her perfume applying abilities, only to have Kii show her the proper way of doing it. Kii then "ups the ante" by showing Tomoko how to apply make-up.

Later, Kii decides to take Tomoko to the Summer Festival. At the festival, Tomoko repeatedly tries to show-off to regain dominance, but her efforts only embarrass Kii which causes her to scold Tomoko. They eventually go to a shrine to make wishes. Tomoko secretly wishes that a "small misfortune" befalls Kii. Afterwards, Kii trips on a rock and drops her hair clip. Seeing that Kii has no luck finding the clip, Tomoko gets on all-fours and uses the smell of the perfume to find it instead. Kii is gracious toward Tomoko and explains that the hair clip belonged to her dog, Purin, before she passed away. She then clips it on Tomoko, and Tomoko stands stunned that she has become a replacement for Purin.

Who looks after whom?

The subject of the advice seems very familiar. 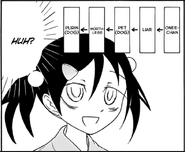