During the night Tomoko shows Kii a scary video. While Kii is immersed in the story, Tomoko scares her by yelling, “boo!” She then teases Kii about it, but Kii insists they watch the rest of the video.

When they go to bed, Kii remains wide awake with a smile on her face. When morning comes, Kii suggests that they eat watermelon on the porch. Tomoko agrees and they sit out to enjoy the scenery with some watermelon and tea. Kii brings up the story about the 8 foot tall woman from the video they watched, and she then excuses herself to use the bathroom. Tomoko relaxes and looks out at the scenery. She suddenly sees an 8 foot tall woman peeking out over the hedges. The woman stops to look in her direction and then continues walking. Tomoko shakes as she sits on the porch when suddenly the woman appears to lean right over her.

It is revealed that Kii is holding a 8 foot tall woman puppet. She happily asks if she scared Tomoko with a scarecrow but only sees a glass of spilled tea. She sits and waits for Tomoko. Tomoko shows up a little later without her pants on and her face shaded from view. Tomoko calmly lectures Kii on the difference between safe and dangerous pranks. She then calmly asks Kii how she would feel if her prank made her have a heart attack and pee herself. Kii responds that she would feel sad and asks if Tomoko peed herself. Tomoko denies this and maintains that she merely raised a hypothetical situation, to which Kii asks why she is not wearing any pants. Tomoko elaborates that Kii’s prank scared her so much, that she spilled the glass of tea on her pants. When Kii makes the observation that the glass spilled on the floor, Tomoko argues that if she drank tea and a little came out of her bladder, it is still considered tea. Kii, not wanting to upset Tomoko further, apologizes and simply agrees with her. Finally revealed, Tomoko's face shows she is still stunned. 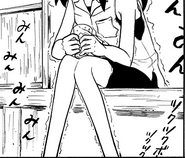 Tomoko without pants on. 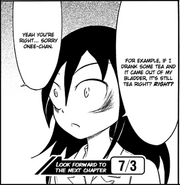 Tomoko's physiology claims have not been verified WataMote Wiki. . . .